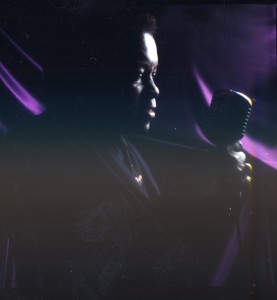 As a singer whose singles are as highly prized as his live performances, Lee Fields doesn’t boast the most sprawling back catalog of any vintage soul shouter. Instead, his recordings, slowly measured out over time, distill the steady advancement of a groove technician supremely engaged with wrenching the most emotion out of the minimal backing he’s associated with. Dishing out “Bewildered” in the late sixties, a song James Brown worked with almost a decade earlier, wasn’t a leap forward in the genre. Sharing a syncopated minimalism with the better-known vocalist followed for Fields. As much as any lone funky track can revel in a solitary musical idea, “She’s a Love Maker,” from Fields’ 1973 “Let’s Talk it Over” turns in a reasonably traditional backing track as the singer figures out one of his femme-conquests.

What’s remarkable about the track and the arrangement Fields deals with is the two beat wah-wah flourish. Curdling up from the tune, an indefinable note enlivens an otherwise sparse song. Since the time of the disc’s release thirty years back, the crooner has surfaced sporadically to toss off mixed bags of soul, funk and R&B, only in the last decade making it something of a regular occurrence. Linking up with New York’s Truth & Soul Records for a disc in 2004 and eventually 2009’s “My World” marked the North Carolinian’s most visible efforts to date. Unlike some of his earlier albums, Fields found himself in the company of a band equally impressed by Wu-Tang Clan samples as it was by Isaac Hayes soundtracks. The resultant music is a harder-edged funk for Fields to moan over as the singer retains a sort of tough, lovelorn vocal style. There are some of those same surprising musical turns even at this end of Fields’ career, “Money I$ King” blending Brownian funk and stately string flourishes. It’s still all Southern-reared grit. (Dave Cantor)