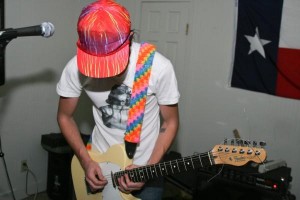 Some of the best and some of the worst music sounds like it was made by artists on a boatload of drugs. Cameron Stallones’ “Sun Araw,” a solo recording endeavor and live road-act, deals in both. Stallones started dishing out albums under the auspices of Sun Araw in 2008. Working on as many Not Not Fun Records-associated acts as humanly possible (Magic Lantern and its high-viscosity recording endeavors deserving of particular distinction), a torrent of releases followed, too many to keep track of unless one falls under the heading of collector-scum.

Even those completists are apt to note that over the course of three years, spanning from “The Phynx” to Stallones’ newer “Ancient Romans,” the project occasionally takes on a bit more than one performer can properly figure. The SoCal dweller even went so far as to head to Jamaica and record a bit with the Congos (“Ark of the Covenant,” “Fisherman”). Still, songs like “The Message,” from the 2009 album “Heavy Deeds,” churn in low-key psych revelry. Distance between proper song-craft and simple-sound builds from there as compositions become looser on subsequent albums, finally arriving at the sonically cogent but wildly uneven “Ancient Romans.” Part of Not Not Fun’s legacy is an avant-attitude about sculpting sonics pervading Stallones’ work. He’s lost a handle on it here on this latest work, “At Delphi” being decidedly difficult to groove to. That being said, live improvisations from a guy who’s released more than ten hours of music since 2008 seem like a safe bet for a good evening out. Alongside Stallones, The Wire and The Empty Bottle present Adventures in Modern Music will also feature Oneohtrix Point Never and an edited screening of “Staring into the Sun” by Olivia Wyatt, a film that falls somewhere between Maya Deren’s work and Ken Russell’s film “Altered States.” (Dave Cantor)