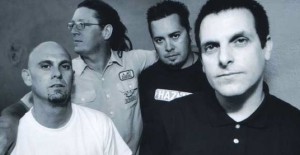 Driving east out of the Bay Area certainly starts out enjoyably. Passing through the various East Bay communities and into cowtown cities, a bucolic landscape unfolds only momentarily disrupted by Sacramento. Entering Tahoe National Forest, despite a few reminders of the Donner Party, it’s easy to understand the allure California holds over so many folks. Coming down out of those mountains, Nevada begins to unfurl, verdancy replaced with shifting brown hues. Then travelers enter Reno. The freeway, which eventually leads to an interstate stretching to Chicago and on to the East Coast, is a major route for drug trafficking. “Reno 911” isn’t a joke—it’s variations on reality. In Reno, getting stopped by cops and being detained for no reason isn’t beyond the realm of possibility. And they really like unloosing the K-9 unit. It’s this sort of repressive nonsense that helped birth 7 Seconds, eighties hardcore icons responsible for proving scenes can spring up just about anywhere. With 7 Seconds’ 1984 “The Crew,” Kevin Seconds and company lay down simple proclamations of how to live in a town when not being “a normal” can get your head kicked in. Independence is a necessity and your friends, of any ethnic or racial background, are required for just about any activity. “Colourblind” might include a bit of regrettable rapping, but songs like “Trust” come off like understandable blueprints for everything from pop-punk to emo. Sure, it’s just another song about girls, but the unreasonably blunt lyrics, especially when compared to a wealth of mid-decade indie fare, sound like stream-of-consciousness at its apex. Hell, there’s even a guitar solo in there. A line like, “You inspire me intensely without any doubt,” doesn’t scan like poetry. But in two minutes, 7 Seconds extols everything hardcore aimed at distilling: dedication, truth, passion and speed. The band performs as part of Riot Fest. There are other bands, but none of ‘em are 7 Seconds. (Dave Cantor)