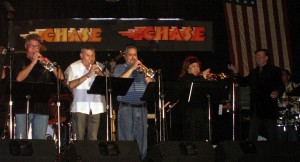 “A choir of trumpets,” was how Bill Chase once described the unique jazz-rock band that bore his name. One of the most distinctive trumpeters of all time, Chicagoan Chase had a career as a “screech” soloist in a number of jazz big bands, most notably in the legendary 1960s incarnation of Woody Herman’s Thundering Herd, before putting together the unique nine-piece band called Chase, a band like no other before or since.

Chase’s own signature solos were an exciting element of the band, but he had the idea to feature no less than four virtuoso trumpeters who were each top soloists and arrangers in their own right and could, with Chase taking the top voice, create a sparkling sonic trumpet soundscape as a section. Supporting the trumpets was a flexible, frantic rhythm section and a growling take-no-prisoners vocalist, though two of the trumpeters could also sing. After three groundbreaking albums and various personnel changes, Chase and two members of the third incarnation of the band—not the entire band as is often erroneously reported—were killed in a small plane crash en route to a gig in August of 1974. 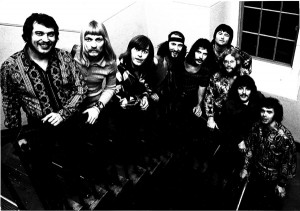 Although the abrupt end of the act for all intents and purposes, after more than thirty years surviving trumpeters Joe Morrissey and Jim Oatts put together a band reunion from the original lineups that performed gigs in Minnesota and Boston. Those went so well that the resurrected band is performing for the first time in the Chicago area—the headquarters of the band in its heyday—this Friday night with bassist Dennis Johnson (later original bassist of Survivor), drummer Jay Burrid, organist Phil Porter and trumpeter Alan Ware from the original band, vocalist G. G. Shinn from the second incarnation of Chase and reportedly Chase’s own first choice for original vocalist, and trumpeters Morrissey and Oatts from the third version of the band.

The groundbreaking, complex and dizzyingly high energy charts that were the staple of the Chase canon will be heard note for note, a tall task, but the band is committed to remaining true to its extraordinary legacy. In addition to the 1971 hit “Get It On” that was the band’s largest commercial success, material from all three of its albums will be heard along with charts that the band never had a chance to record or perform live given how suddenly the curtain was brought down more than three and a half decades ago. (Dennis Polkow)