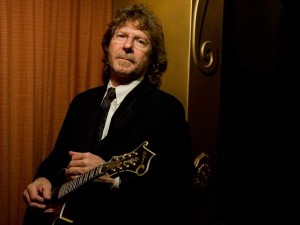 Maybe the most incredible aspect of seeing bluegrass music performed live is the fact that stoners wrapped in tie-dye and crackers with rebel-flag patches sewn on their vests are there for the same thing. Each seeks a sort of instant solace from outside concerns, becoming immersed in frantic pacing of quick-step instrumental numbers and grooves from blues-based songs. Mandolin wrangler Sam Bush is the confluence of those people. He’d easily be mistaken for Phish’s guitarist, but sports a drawl gifted to him by an upbringing in Kentucky. And back in 1969, he and Alan Munde set out to update the music from their part of the country, turning Flatt and Scruggs into Jagger and Richards. When Bush founded the New Grass Revival, he also accidentally named the music he’d be associated with for the following four decades. The musical acuity necessary to distill stringed instruments’ harmony while crooning and simultaneously drawing from youth culture turned into a seventeen-year run with The Revival. While touring and recording, though, Bush found himself backing acts as diverse as Leon Russell and Garth Brooks. Becoming the face of modern mandolin styles has only emboldened the performer, who, onstage, can easily be figured as living out dreams he had of stardom as a child wading through his rock ‘n’ roll record collection. Bush’s original vocal numbers aren’t always stellar, but at least reference a background steeped equally in Chuck Berry double entendre as it is in jugs of whiskey. His ability to work in a reasonable cross-section of uniquely American music, plus some Bob Marley flavor for the dreadlock set, cuts him a wide berth for entertaining. Maybe he’s better heard in a muddy field, but the Old Town School of Folk Music should serve as an ample space. (Dave Cantor)