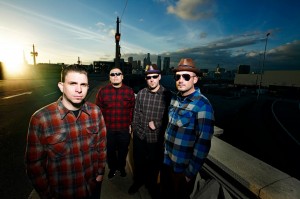 Musical quality is ensured when the rhythm section from Hepcat joins your group. At least, it’s been true for The Aggrolites, a SoCal quintet dedicated to vintage-sounding Jamaican music, swinging from rock steady derivations to latter-day Peter Tosh-styled rock-inflected compositions. Beginning life as a pick-up band serving at the pleasure of a variety of touring luminaries, Jesse Wagner and company founded the proper recording ensemble back in 2003 with an ode to skinhead dance music entitled “Dirty Reggae,” the name, perhaps, referring to the band’s penchant for American soul as much as Jamaican sounds. Several albums for the Hellcat imprint followed as well as a stint working with Rancid’s Tim Armstrong on his 2007 “Poet’s Life” album. There’ve even been a few of The Aggrolites efforts featured on TV and on soundtracks. After five discs, which are admittedly a bit spotty at times, the ensemble’s latest offering,“Rugged Road,” is stunningly consistent. Issued in tandem by Young Cub Records and Canada’s Stomp imprint, the disc begins with a thinly veiled Junior Murvin reference, replete with falsetto and mock Lee Perry production values. In a show of utter certainty, The Aggrolites line up three instrumental tracks in a row. “Dreamin’ on Erie” opens in reasonably traditional tones and continues on until a bit of production magic stutters an echo out longer than listeners might have anticipated. But what separates this track from a spate of other groups attempting to emulate JA forefathers like the Hippy Boys and Derrick Harriott are Wagner’s and keyboardist Roger Rivas’ extraordinary talent. Turning guitar solos from single note runs into a wobbly mass of sound isn’t a task most can accomplish without a stash of pedals. Wagner, apparently, doesn’t need the assistance. (Dave Cantor)