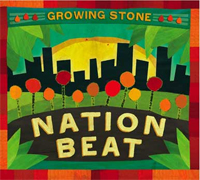 On the new record by Nation Beat, a Brazilian-inspired band led by Brooklyn-based percussionist Scott Kettner, the group goes beyond its Maracatu roots to explore more sounds from Northeastern Brazil—principally forro (pronounced Fo-HO), a syncopated beat that is highly popular in the region, especially in the state of Ceara, where vocalist Liliana Araujo hails from.

The album kicks off with “Puxa o Boi,” a Portuguese-language tune that blends funk and xaxado, a rhythm from Pernambuco, Brazil that is rarely heard stateside, and is followed by “Bicu de Lambu,” a syncopated instrumental that features the talents of violinist Skye Steele, a musician who deserves to be discovered by a wider audience.

The title track was inspired by the plight of independent farmers in the United States, who are being driven out of their lands because of the harsh competition they face from corporate farms. The song has a syncopated forro beat and is very danceable, even though the lyrics are very serious.

There are a few weak moments. For instance, on the cover of Alceu Valenca’s “Morena Tropicana,” Araujo makes the same mistake many vocalists from Ceara do: She tries too hard to emulate the style of pop singer Ivete Sangalo. However, that is a minor issue in an album that is very enjoyable from start to finish—perfect for an alternative dance party. (Ernest Barteldes)