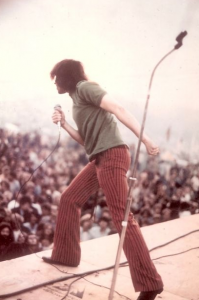 Listening to “Bring It With You When You Come” off the Siegel-Schwall Band’s 1967 “Say Siegel-Schwall,” contemporary blues fans can pick out some chintzy percussion seemingly coming from a kit made of scrap metal. Add in Jim Schwall’s frantically played guitar solos and the track doesn’t really sound like a mid-sixties confection so much as an uncovered bit of blues-cum-country revelry from another place and time. Chicago, though, has always served as a hub of musical activity and touring. So this ensemble found itself at the beck and call of touring figureheads as each passed through town a few decades back. Overshadowed not only by blues originators but also by Paul Butterfield’s hyped-up take on the genre and John Mayall’s free-love vibe, the Siegel-Schwall Band was still able to craft a somewhat unique approach to the genre amidst a crowded field. “That’s Why I Treat My Baby So Fine” wasn’t light-years ahead of anybody, but the song was a more relaxed approximation of source material than some Brit-Invasion types were able to muster. There’s a reductive groove at work on the track with Corky Siegel’s harp functioning as leader, keeping the band at bay on the eleven-minute offering. Somewhere around eight minutes in, the group kicks into a quicker pacing, leaving behind the stripped-down blues for a more fully realized rock sound. It’s that first portion of the song that makes Siegel-Schwall something unique, though. Hendrixian flourishes weren’t necessary; neither were drug-tinged lyrics. There wasn’t a tough-guy stance at work here, either. The ’67 album marks the band’s high-point as recording artists, even though the troupe, in some altered form, would continue making records for another few years. It’s not beyond the realm of possibility to guess that if these guys wound up in the Bay for any extended period of time, they’d be better known. But band members staying in the Midwest and performing every once in a while’s just another perk of living in Chicago. (Dave Cantor)