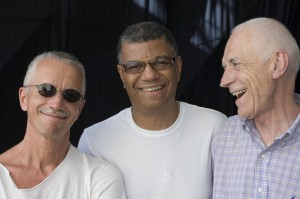 Pianist Keith Jarrett, bassist Gary Peacock and drummer Jack DeJohnette began playing as a group something like three decades back, but only after each performer had established himself as the preeminent musician on his instrument. The rhythm section individually gigged with everyone from Albert Ayler to Miles Davis, played every jazz subgenre from cool to fusion and did so internationally. Jarrett, who came to prominence as a result of his solo piano recordings, “The Köln Concert” deserving particular distinction, actually played with DeJohnette on a few recordings prior to hooking up in this ensemble. Back in 1967 the pair played on Charles Lloyd’s “Forest Flower,” a live set captured at the Monterey Jazz Festival. The band’s in unsurprisingly fine form with Cecil McBee onboard playing bass. The live-set approach to the genre, in smooth tones, isn’t surprising considering Jarrett would eventually hook up with ECM for a decent percentage of his career. But the Jarrett-Peacock-DeJohnette lineup assimilates ensemble playing with the pianist’s proclivity to ramble melodically on his instrument. Initially conceived as a troupe to dispense songs from jazz’s book of standards, Jarrett eventually began writing original tunes for the trio to perform. Hearing 1992’s “Changes” today shows the troupe is working in a contemporary-ECM vibe, with Peacock and DeJohnette trying to complement Jarrett’s single-note finery. There’s not much new ground to broach at this point, but the group still counts three figures from the genre who are going to remain important players to reckon with as they explore American music. (Dave Cantor)