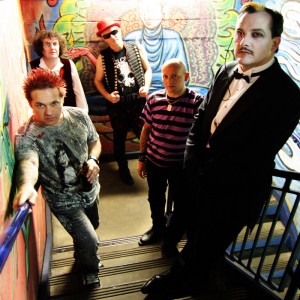 The Sex Pistols will always remain the standard bearer for UK-based punk dating back to the genre’s inception. They were a good band—yeah, good. Steve Jones kinda rules. Still, with the Pistols’ one album and the slew of bad press they got, there’re a number of reasonably compelling arguments for The Damned to become the more historically revered group. If one dismisses the fact that the more dour and frequently black-clad ensemble issued the first independent single of the punk era on that side of the Atlantic, drummer Rat Scabies’ presence alone almost makes the case for The Damned’s superiority. Of course, he’s dead. And has been that way for a good long time. But hearing songs like “Stab Your Back,” issued as a B-side as well as on the album “Damned, Damned, Damned,” showcases a band functioning on a totally different level than folks turning in half-cocked tracks about fictional abortions or how awful Maggie Thatcher was. There’s no political or social pretense coming along with “Stab Your Back.” Lyrically, the track’s a group-shouted repetition of the title, context is utterly absent apart from the fact that a dude named Rat wrote the thing. It’s almost on par with “Cobwebs and Strange,” one of the few pieces of music The Who’s Keith Moon left behind prior to kicking the bucket and ostensibly dooming his band to future decades of mediocrity. The Damned didn’t incur the same sort of lame stasis following Scabies’ death, but the group’s opening trio of albums, all counting its first drummer, stand out starkly compared to latter-day, goth-inflected fare. Or even newer efforts. But hearing a smattering of the Damned’s early catalog, in any situation, ranks as a decent evening out. (Dave Cantor)