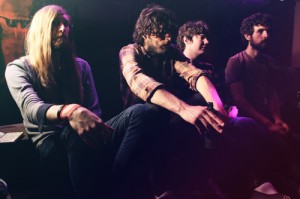 You know how people describe the Beach Boys as a barber-shop quartet on acid? Yeah, not too apt an explanation of the band’s sound. But it’s meant in a positive light. Unfortunately, the same sort of reductive comparison can be used to wrap up songs like Ganglians’ “Things to Know,” off the band’s Lefse Records disc “Still Living.” The track, one of only a few lesser efforts issued here, possesses the same sort of sunny, wind-swept feel of Ganglians’ compositions from earlier discs. There’s a sleek, eighties cocaine vibe at work alongside the song’s heavy bass figure. “Still Living,” an amusing title considering the band comes off as a bit stodgy throughout, isn’t a mistake, just Ganglians trying a slightly different approach to pop numbers equally beholden to classic radio hits and the last decade’s infatuation with pseudo-garage rock. Keeping this ensemble from disappearing into the miasma of bands kicking around, but all dressing up like extras from Oliver Stone’s movie on The Doors, are the harmonies Ganglians are occasionally capable of pulling off. Of course, everyone’s off-key on the lamentable “Good Times.” But on the band’s 2009 “Monster Head Room,” there’s the Sacto-band summoned “To June,” which hasn’t wound up being on a commercial for some vacation destination, but should. Opening with some ambient noises and crickets, a cheap guitar strums out a few chords as the vocal melody kicks in. There’s a swell as multiple voices join the somber revelry making all those nature sounds seem detached from the proper song. Hearing the simple refrain—the song’s title sung as softly as possible—outranks just about everything on “Still Living.” We should just count the new disc as a fluke and wait around another year to find out if Ganglians can pull off a new stunner. Seeing as a self-titled bummer preceded “Monster Head Room,” inconsistency just isn’t a surprise. (Dave Cantor)