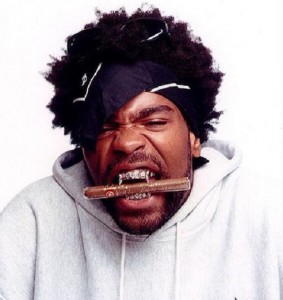 It’s alright to tour on your career highlights if your career highlights include Wu-Tang Clan’s first album as well as “Tical.” Method Man has a name even tangential rap fans have heard. That might have to do with the MC spelling his name on “Enter the Wu-Tang” back in 1993. But those seven syllables resonate just as much as Meth’s carefully crafted public persona. Apart from being the menacing dude in a group of dude’s who, according to their tracks, are just as likely to snap your neck with some kung-fu as they are to confuse you with dusty references to Supreme Mathematics or the Shaw Brothers, Meth’s been a comedic force on the big screen. Regardless of his predilection for films with dodgy dialogue, his entrance into the realm of solo performer, on the aforementioned 1994 “Tical,” sonically continued the ragged blueprint Wu’s first album set down. “P.L.O. Style,” detached from real-world political problems, is another in an endless string of tracks on which MCs boast about their skills. Aided in production by RZA, Meth goes in on a track mixing warrior monks, Arab militants and enough destructive imagery to connect it all together. RZA’s contribution isn’t to be given short shrift, but Meth’s ability to dramatically shift rhythmic patterns from verse to verse is something most other MCs have a tough time even conceiving. “Tical” did enough for Meth to grant the guy a sequel to the album as well as propel him into acting. So, he might be the most recognizable Wu-affiliate. If he’s not, then he’s one of the most consistent performers to come out of the crew. No matter how many times Meth goes on about bringing something called “da ruckus,” it’s engaging. It’s not a gimmick, just a style so natural as to fall out of the rapper’s mouth. Curren$y opens the show along with Big KRIT, Smoke DZA and a few others. (Dave Cantor)