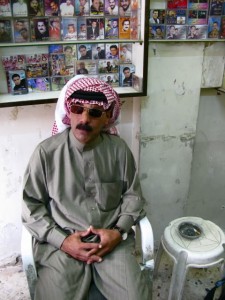 On the first few collections of Omar Souleyman’s work issued by Seattle’s Sublime Frequencies, the singer and group leader sounds different, not from track to track, but on a pretty regular basis. These early collections, which began a steady stream of work released in the States by Souleyman, were corralled from a career that was already in its second decade. Maybe his voice just changed. Dabke, which could be described as a Middle Eastern approximation of “Riverdance” and break-dancing to an electric pop music, helped Souleyman become a star in the Arab world throughout the nineties. His latest album, a live affair, finds the Syrian-born singer traversing club-life, dispensing his world-worn frantic take on dance music. There aren’t too many distinct pacings—it’s all uptempo, even as some time signatures Souleyman’s included will surely be surprising to listeners. But what’s most amazing about the music he sings over—it’s in Arabic, so don’t go thinking you’re bound to sing along—is that it sounds like everything you’ve ever heard before, but put together in a completely new way. Souleyman’s backing players, keyboardist Rizan Sa’id and electric saz player Ali Shaker, push at electronic music. Occasionally, as on “Atabat,” older, more acoustic strains of Syria’s musical heritage peek through, but the contemplative tempo is an exception rather than the rule. The wealth of hipster-friendly African- and Eastern-oriented compilations local record stores seem to be clogged with present a brand of music pretty easily assimilated into Western sensibilities. Souleyman isn’t that at all. His music may be better suited to the culturally curious, to budding musicologists or to people who eat pills and dance. But it’s uniquely his own and unlike just about everything else one’s bound to hear any time soon. (Dave Cantor)