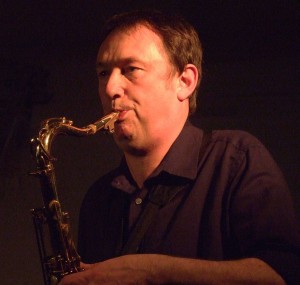 The squeaks and assorted grizzled noises stumbling out of speakers from any John Butcher recording aren’t haphazard. They’re not carefully planned either. Free improvisation finds the UK-born multi-instrumentalist endlessly searching for the next note, pitch or sound to pull out of the horn he’s blowing. There’s even a tendency to add a bit of electronic manipulation in order to fill out improvs. But Butcher isn’t likely to play the same song twice. Over the course of a recording career reaching back to the early eighties, the sax player has collaborated with a wide swath of the international improv scene. While names like Derek Bailey remain significantly more visible than Butcher’s, his inclination to perform on bills with gamelan percussion groups separates him a bit from what folks associate with such a potentially startling music. What’s intriguing about Butcher’s work is that amidst a flurry of collaborative recordings, beginning with a 1984 set alongside Chris Burn called “Fonetiks,” listeners can hear Butcher grasping at sounds that are simultaneously brilliant and bright, but utterly distanced from Western sensibilities. “Punctuate,” from that 1984 effort, sounds like a flipped-out sadhu who listened to a side of Coltrane’s work and ferried off by himself. It’s the difference between recordings—compare it to the blasts of noise accompanying Butcher’s meeting with Bailey on “Vortices and Angels” in 2001 or the slowly unfolding explorations from this year’s “Apophenia”—that make the sax player’s career so interesting to follow. Each work reaches a frenzied climax, but how Butcher gets there, sometimes only chirping notes through his embouchure without fingering his horn, is why witnessing him live is a requisite for free music fans. His solo performance being a noteworthy moment during the Umbrella Music Festival speaks to the impact Butcher’s had within the free improv scene. The Tim Berne and Nick Mazzarella Trios are also slated to perform sandwiched around Butcher’s free-for-all. (Dave Cantor)