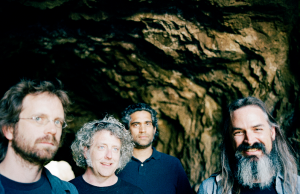 Leaving copies of “Shrinking Moon for You” in San Francisco thrift stores seems like an odd way to garner attention for a newly minted band. Wooden Shjips’ first slab of vinyl ostensibly laid the groundwork for what was to follow during the next five years. But the act, conceived of independent from economic interests, served to tie the Shjips into a Bay Area psych history the band doesn’t lean on as heavily as the press has made out. Recently issuing “West” through Thrill Jockey—the cover art features a shot of the Bay Bridge—isn’t going to detach this troupe from the Airplane’s legacy, rightly or not. The album does, however, count as guitarist Ripley Johnson’s return to the fold after flitting around the world with Moon Duo, a group which sounds suspiciously like the Shjips, just enamored with pop songs. Working with a rhythm  section as solid as any in contempo-psych, Johnson and keyboardist Nash Whalen slink their way through cunning solos, dispensing a wealth of notes that go nowhere, but go on forever. “West” doesn’t turn in any stunning advancements in the Shjips music; “Crossing,” with its viscous pace, might have initially been recorded back in 2006. Slow development and deliberate soloing characterize most of what’s here, “Lazy Bones” being a bit faster than anything else as Johnson sings. A sturdy dance beat supports the almost-pop song. And even when the guitarist jumps into a self-important and subtle solo, that rhythm persists. Including a bit more time to develop vocals during a few songs might be the only aspect of Shjips’ work distancing “West” from earlier efforts. It’s just hard to fumble a formula that’s been working so well for the last half-decade. It can’t be refuted that Johnson’s time in Moon Duo is seeping into the Shjips. Even if it is, ending the album with a track run backwards for five minutes is pretty cool. Not paying close attention, though, the purposeful move might just float by unnoticed. (Dave Cantor)