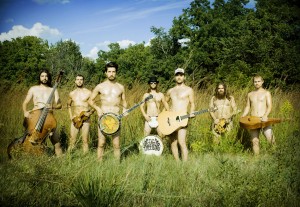 Back in 2008, The Giving Tree Band gave themselves a challenge: record a carbon-neutral album.

The group is very into the environment. Nature permeates all their songs. So this seemed like a natural–no pun intended–extension.

The Chicago-connected folk-rockers went up to Baraboo, Wisconsin, and set up a recording studio in the solar-powered Aldo Leopold Legacy Center. They worked exhausting twelve-hour days. They slept at a campground ten miles away, biking to and from the studio, eating vegetarian meals donated by a local farm. Flooding that summer brought record-level mosquitoes, as well as ticks. Recording took a month.

The end result was “Great Possessions,” a beautiful, earthy eighteen-track record that made the band a darling of the folk world and a hero among environmentalists.

“It was an amazing experience,” said Todd Fink, a cofounder of the group. “The center was so supportive. They were really inspired by what we were doing.”

Dubbed “The Greenest Band in America” on more than one occasion, the group may be a harbinger for what’s to come in the music industry, as our culture becomes increasingly environmentally conscious. And their environmentalism extends beyond the recording of that album: it touches everything they do, from the instruments they play to the rooms they’ve created to play them in.

“I think it’s rare for people to look at it on this microscopic level,” Eric Fink, the other cofounder, told me. “But it’s very natural to us. It’s something we all really believe in.”

On a recent weekday, I drove out to rurban Yorkville to tour the group’s home studio, where they are working on their fourth full length, tentatively set to be released in the second half of 2012. 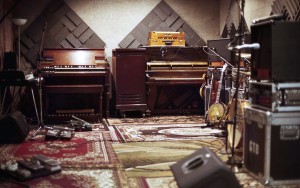 The house, where all the members of the band live, is tucked on a little wooded road that helps illuminate where they get the inspiration for Thoreau-evoking songs like “Red Leaves” and “Barefoot Brothers.”

Stocking-clad brothers Todd and Eric Fink met me at the door. They started the band back in 2004, and quickly began looking for ways to offset whatever negative environmental impact their music would have.

It was hard at the beginning: their first custom instruments were satisfactory in the green department, but weren’t up to par musically.

Then they discovered Highland Strings in Ohio and Rumley Guitars in Colorado–small businesses that made the band custom instruments.

Downstairs, in their practice space, the Finks showed me a few.  “This guitar,” Eric said, holding it proudly before me, “is made out of a piano.”

He nodded, smiling. “The wood from a broken piano.”

There is a drum set made of bamboo. Several beautiful guitars made from reclaimed wood. None are more expensive than any other custom-made instruments would be, Todd told me. There’s also an impressive collection of reused instruments, like the two upright basses that date back to the 1940s and the organ that used to belong to Wilco. One of their amplifiers—a small red box the size of a VCR—is apparently powerful enough to use at festival performances without even turning it higher than three.

They took me back upstairs and into the recording studio they’d constructed in their attic.

“We call this the Treehouse,” Todd told me. 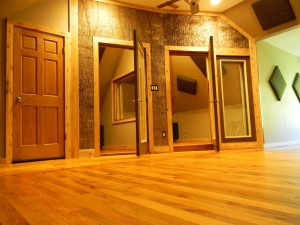 The floor was tan wood. The walls had swaths of tree bark nailed to them. The place literally looked like a house constructed in a tree.

There were two clean empty rooms–one for drums, one for whatever else. The doors and windows? Eric Fink found them on the side of the road.

“It’s a problem, really,” Eric said. “I can’t find a window or a door without taking it.”

The transformation of this regular home into musical treehouse was the product of almost fifteen years of building and tinkering.

Presently, they’ve turned their attention away from woodworking and studio-constructing in favor of recording a follow-up to their acclaimed 2010 release, “The Joke, The Threat & The Obvious,” as well as a contribution to an upcoming compilation among the likes of Moby and Chrissie Hynde (of Pretenders fame) to benefit farm-animal sanctuaries.

And in doing so, they will be paving the way for the future of the industry.

“Most people haven’t thought of this stuff,” Todd Fink said. “I think we want to show that there are options.”

“The more people show interest in this kind of thing, the more the technology will develop.”

If Thoreau Were a Folk Rocker: How The Giving Tree Band Recycles Technology (and everything else) | Newcity Music

If Thoreau Were a Folk Rocker: How The Giving Tree Band Recycles Technology (and everything else) | Newcity Music