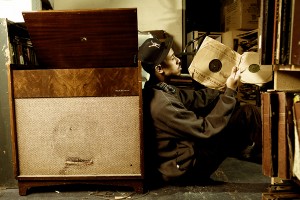 Since Blu’s last Chicago visit in early April, the Los Angeles-based MC issued “No York!,” his long awaited major label debut. The disc’s arrival, though, doesn’t seem to have done much for the rapper’s visibility. In part, electronic tunes like “E V E R Y T H I N G O K” have something to do with that. The bouncy track accompanied by a femme-vocal chorus is a pretty drastic departure from the A-Tribe-Called-Quest-on-the-West-Coast thing Blu’s been working over the last few years. “No York!,” though, is a pretty diverse affair, with “H O U R S” and its sonic kin feeling like efforts from the anticon camp dating back a decade. Blu’s one of the more prolific performers at work today—the release of “No York!” way back in August means the MC and budding producer has issued a few more hours worth of work since. Digitally released long-players like the most recent “God is Good,” “Jesus” and “Open” don’t serve to extend any specific vision; each is just a different approach to hip-hop. “Open” is Blu’s productions as plundered by other MCs, and the others are self-sufficient collections of raps and beats. “The Norman Rockwell Beat Tape” has also shown up recently. Dismissing the willfully difficult music on “No York!,” Blu trucks out a handful of new instrumentals which revel in relaxed tones, like “Killafornia Freestyle,” which features a bit of the rapper’s flow midway through the affair. “Hash Oil Blunt” barely features a bassline. So subtly dropped in, Blu’s able to focus the track on a sparse guitar sample supported by some rolling snare and (almost) timely kick drum. “No York!” apparently wasn’t a grand proclamation so much as a stop along the way for Blu to try something new. Its lack of impact is still a bit surprising. (Dave Cantor)