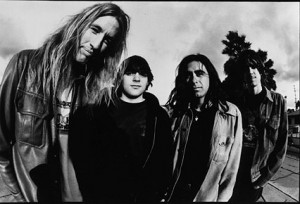 If you’re in a band seeking to define itself and carve out a specific audience, releasing work on a label called Bong Load will probably go a long way toward reaching your goal. Fu Manchu, a SoCal rock act lost in a haze of exhaled smoke, Sabbath records and distortion pedals, might not have been out looking to get tagged as simple stoners. But writing two decades worth of material without delving too deep into serious thought and repeatedly interpreting seventies hard rock isn’t likely to do much else. None of that’s bad, though. Fu Manchu and its like-minded brethren–Kyuss and later Nebula specifically–deal heavy-handed bar chords for the barroom set. Angling at a market endlessly clad in denim, Fu Manchu seems stuck to an impressive infantilism, disallowing lyrical development beyond giving women rides in fast cars. The band’s long-playing debut, “No One Rides for Free,” dating back to 1994, sports a number of songs detailing four-wheeled rust buckets. When not exploring the wonders of American cars, the Manchus dish out three minute songs with five lines worth of lyrics. “Shine It On” could have been about polishing a hot rod; instead the song seems to explain an evening at a slummy diner just before some hallucinogenic drugs kick in. What brings the band through town Monday is an end-to-end performance of its 1996 “In Search Of.” Selecting the album’s a curious choice seeing as there’s not much making the recording distinct from the band’s other efforts. “Neptune’s Convoy” could be considered one of the band’s more measured takes on stoner rock. Well, there’s a brief section that isn’t all riffing, at least. Fifteen years worth of recording and touring followed “Search”’s release. Europe hosted the band on international jaunts alongside some reasonably big names in music. And so far into its career, Fu Manchu continues to rattle around in the genre-hell of its choosing. (Dave Cantor)