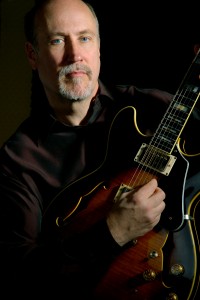 Being a bit of everything hasn’t become a problem for John Scofield—it’s just a situation jazz guitarists find themselves in today. Coming along during the seventies, Scofield wound up working in a fusion mold, contributing to discs like flautist Jeremy Steig’s 1977 “Firefly.” After picking out the cheesier moments of the long-player, Scofield clearly becomes the most memorable and powerful player.Scofield contributed to Billy Cobham’s “Shabazz,” one of the more palatable frenetic fusion discs from the era, and went on to work with some early eighties incarnations of Miles Davis’ ensembles as well. Since then, Scofield’s become one of the more recognizable and steadily working jazz players in the American system. Being introduced to the jam-band set through his collaboration with Medeski, Martin and Wood on his 1997 “A Go Go” was a momentary highlight as the indulgent and rather boring “Uberjam” followed a few years later with a couple other discs peppered in for good measure. Seeing as some of Scofield’s most memorable moments come on discs that were orchestrated or dominated by other players shouldn’t come as a surprise any longer. So, his appearance at the Chicago Symphony Center might come and go with little fanfare. Luckily, though, Ravi Coltrane’s group is set to open the evening. And while Alice and John’s kid doesn’t exemplify the sort of explorative inclination his predecessors did, being supported by Karriem Riggins isn’t going to hurt. Though the drummer wasn’t a part of an ensemble that recorded Coltrane’s 2009 “Blending Times,” funkier tracks like “Narcined” are going to lend themselves to the percussionist’s style. There might be some more avant-jazz going on somewhere in Chicago this Friday, but none with the possibility and historical implications fans will find here. (Dave Cantor)