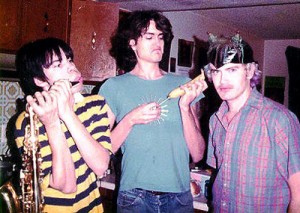 When I was a kid, the Meat Puppets’ “Too High to Die” was released on a major label as a result of big business’ realization that independent bands could be marketed just like everything else. At some point, in my adolescent enthusiasm, I proclaimed the band inspiration to Kurt Cobain during a discussion with my father. His response was, “What’d they inspire him to do, kill himself?” Funny? Sure. And a bit macabre. But if not for that Nirvana connection, a huge portion of my generation wouldn’t have stumbled onto the band until rifling through the SST catalog, wondering if anyone else sounded like Black Flag or Hüsker Dü. Well, no one does, exactly. But no one else really sounds like the Puppets either. Sporadic break-ups, incarcerations and drug habits sidelined the band a few times. But almost thirty years into its career, this latest putsch finds these Arizona natives playing to crowds weaned on bands that were weaned on the Puppets. There’re hints of vintage Puppets sporadically cropping up during “Lollipop,” the trio’s latest disc issued through Megaforce this last spring. A guitar solo from “Baby Don’t” finds Curt Kirkwood winding through territory he initially explored on the band’s 1984 masterpiece “II,” but backed by a less rambunctious country appropriation. Of course, coming after the reggae mutant “Shave It,” almost anything would have come off pretty well. But for the majority of the Puppet’s new album, the band just sounds like a troupe of road-tested rock players with chops who all know when to break ‘em out. Granted, each song’s runtime here basically doubles anything issued on the band’s earliest albums, but that’s what’s bound to happen as a player matures. For fans expecting renditions of Meat Puppet’s classics, a dose will surely be dispensed. But with the Puppets releasing three albums in four years, these desert dwellers have a whole new catalogue to draw from. At least “Amazing” seems like the total realization of the band’s folk-rock infatuation. Everyone even sings in key. (Dave Cantor)