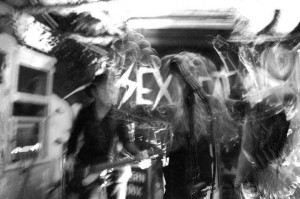 A decade-old band fronted by a dead guy probably isn’t the best reference to begin with, but Indian Jewelry, especially on a compilation of early cuts called “Sangles Redux,” summons a bit of the Lost Sounds. Coming out of Houston, though, sets up Indian Jewelry in a lineage reaching back to the Red Krayola. Since the early aughties, the band’s gone and trampled on any number of sub-genres, leaving some of its more garagey leanings behind. Indian Jewelry’s first long-player, 2006’s “Invasive Exotics,” combined the band’s electronic inclinations with a sturdy understanding of rock ‘n’ roll extending it all on “Free Gold!” a few years later. That 2008 disc went so far as to include a bit of strum and hum moments. “Pompeii” drips with an uncaring vocal. But the simple folksy structure of the whole thing comes off so effortlessly as to make the two-minute song seem like an accidental piece of perfection. It’s nothing more than a pair of guitars, one soloing in concert with the song’s simple progression, some maracas in the background and Tex Kerschen moaning along in key. Of course, “Free Gold!” still had its share of electronic experimentation, which became foregrounded on 2010’s “Totaled.” The wildly shifting focus from release to release somehow holds together as Kerschen and his wife, guitarist/vocalist Erika Thrasher, continue to refine an unwieldy set of inspiration and expectation. The band hitting the road with Prince Rama, a Paw Tracks label affiliate, isn’t too surprising. Dealing in torrid, religious psych trances, the Boston band seems to grasp at the same sort of expansive view of psychedlia as their Texan brethren. A religious streak makes Rama’s musical discourse a bit tough to handle at times, but taking it too seriously—especially in a barroom setting—doesn’t make much sense anyway. Locals Piss Piss Piss Moan Moan Moan open. (Dave Cantor)