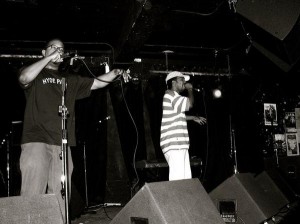 Back during the first few years of the aughties, Chicago’s The Primeridian, comprising See-Me-On and Race, issued “I’ll Meet You in Greenwich.” It was before Kanye dropped out of college and about the same time Common was readying the ill-advised “Electric Circus.” No one knew who No I.D. was. Still. “Musical Mirages,” a single compiled on Primeridian’s first long player, remains sturdy enough to dig up as work exemplifying the group’s style as a whole. But a lot’s happened since 2002. Despite “Greenwich” being something to stake a career on, the ensemble didn’t hit the big time, issuing a few follow-ups, 2008’s “Da Mornin’ Afta” being the most recent without contributions from artists outside of the organic duo. On that album, a track called “Bucktown” crops up. It’s connected to the 1975 Fred Williamson/Pam Grier vehicle of the same name through an opening snippet of dialogue and even references another song with an identical title. Smif-n-Wessun’s 1995 track off “Dah Shinin’” is an effort-free assortment of menacing verses detailing what’s likely to happen in a particular part of Brooklyn. The line “Home of the original gun clappers,” even gets quoted in the Primeridian version. The Chicagoans’ use of the song doesn’t come off as such a natural effort, but comparing anything to early nineties NYC rap stuffs is tough. A jazzy air followed the Primeridian through those discs and onto a collaborative project with local producer Tall Black Guy. “Darling Lure,” issued this year through All Natural Inc., isn’t a sizable leap forward for the group, but does smooth out some of the less-than-stellar production from its 2008 album. With such suitable musical accompaniment, the MCs spit out work like “Hang On,” which might not make them a mint, but should move a crowd pretty easily. Locals Neak and Who Jah Say open. (Dave Cantor)