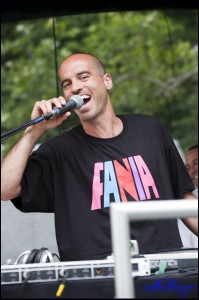 “Kool Keith asked me to rhyme and so I kicked it,” Bobbito Garcia says on the 1993 eponymous Cenobites album. Granting Kool Keith, one half of the Cenobites along with Godfather Don, a platform during the waning days of his affiliation with Ultramagnetic MCs, wasn’t a move based solely on being a fan. Bobbito, who’d been a part of a well-received hip-hop radio show as well as a live fixture on the NYC scene, saw an opportunity to raise up the reasonably obscure and tout it as industry standard. Underground rap stuffs, especially during the early nineties, functioned as incubation for various approaches to the music which would eventually wind up making radio-ready acts a boatload of loot. Simultaneously rebranding the Ultramag MC and launching Fondle ‘Em Records remains a truly important moment. Without it, the world wouldn’t have Black Elvis. And what would we do without him? Apart from Kool Keith, though, acts like the Juggaknots, Scienz of Life, MHz and MF Doom sprung up from the Fondle ‘Em ranks. There wasn’t a specific consistency of sound, but beats did tend to utilize funky breaks and jazzier melodies than folks like MC Hammer. But performers like Das EFX and Da Lench Mob didn’t sound too far removed musically. Perhaps because of that, Bobbito eventually fully embraced his cultural heritage and began incorporating Latin sounds into his DJ sets. A 2004 mix crafted along with DJ Spinna and focused on compositions by Stevie Wonder opens with covers by Hugo Montenegro, Jose Feliciano and Ray Barretto before shifting to Charles Earland’s jazzier interpretations. Five years after Doom’s “Operation: Doomsday,” similar musical textures remain supremely evident on Bobbito’s attempt to cull some of Wonder’s more varied admirers. His set at The Shrine Friday is meant to explore the similarities of aforementioned musics while mixing in some slyly acquired gems from destinations unknown. (Dave Cantor)