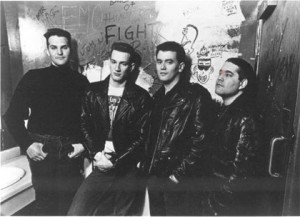 From the beginning, Naked Raygun sounded dissimilar from punk at large as well as from its Chicago brethren mining the same sort of influences from London and New York. A majority of the ensembles trolling squalid bars during the early eighties in Chicago dealt in some heavy-handed, macho hard rock, dashed with some noisy, punky stance. Naked Raygun, while well suited to such an environment, issued a few weird and strangled shrieks not at odds with the scene and punk in general. But “Bananacuda” from 1983’s “Basement Screams” came off like a merger of “Nuggets” instrumentalism, Indiana’s synth-punk scene and Chicago’s coalescing alternative music scene. Sure, the song’s not even two-minutes long, but the surfy-progression along with singer Jeff Pezzati’s seemingly random screams adds up to something well beyond the heavy-handed Midwestern take on punk’s second wave. That 1983 album, however, was only an opening salvo–the band kicked around for just about another decade. What followed was a procession of Naked Raygun recordings which found the group experimenting with guitar tonality and how crunchy it could be in concert with a song’s melody. “Potential Rapist,” another cut off the band’s first album, is frequently discussed in connection with Naked Raygun’s personal and political viewpoints. And while some of punk’s high-minded diatribes deserve proper examination, what’s actually interesting about the song is how much it resembles the Wipers’ “Now is the Time,” also issued during ’83 on “Over the Edge.” The two bands weren’t exactly exploring the same territory over the course of their respective careers, but the same brand of drudged-up heavy-pop surfaces in each group’s discography. The Raygun, however, split up at just about the same time the Wipers’ Seattle offspring began to gain international acclaim. A few reunions followed, but no new material. Increasing the frequency with which it performs, though, could lead to some reconstituted studio efforts. Who knows? (Dave Cantor)