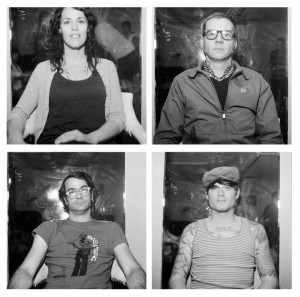 In a weird way, the first handful of records Thee Oh Sees issued—or The Ohsees or even OCS—presaged the band’s latest disc, “Castlemania.” The ensemble’s always had an ear for jacking up pop melody, but the 2011 In the Red-released disc deals in tunefulness that’s seemingly subservient to flute jams like “Meat Step Lively” from 2009’s “Help” or the thirteen-minute title track on “Warm Slime” and its galloping meanderings. Jammed in between these discs were a few albums springing up from labels with lower visibility–the experimental “Zork’s Tape Bruise” on Oakland’s Kill Shaman and Captured Tracks’ relatively hum and strum “Dog Poison.” The sporadic inclusion of acoustic guitar on Thee Oh Sees recordings doesn’t point to some grand realization about song-craft. Instead, the Bay Area ensemble swings back and forth between the repetitious, if not utterly rollicking “Destroyed Fortress Reappears” and the seemingly concise “Block of Ice,” insinuating that John Dwyer and company disregard consistent approaches to rock ‘n’ roll. Somehow, though, there’s still a singular sound issued over the course of the band’s ever-swelling catalog. It has something to do with vague psychedelia, but nothing as heavy-handed as the seven-minute instrumentals of Wooden Shjips, another SF band. There just hasn’t been a full-length merger of Thee Oh Sees’ various approaches. So at least fans can look forward to the possibility of a grand, all-encompassing statement. Until then, the group continues to tour some ridiculous percentage of the year, hitting up Chicago at least a few times every couple months. Getting to see Dwyer shove a microphone into his mouth might seem like old schtick at this point, but the act still reeks of the performer inching toward the unhinged. Paul Cary and Total Control open. (Dave Cantor)