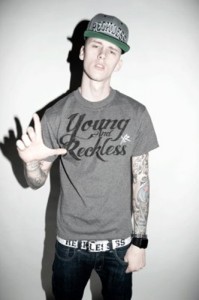 Signed to Diddy’s Bad Boy imprint, Machine Gun Kelly’s been in the news as much for organizing flash mobs as he has been for making music. The relative success of “Lace Up” granted the Cleveland MC enough pull to tour decent-sized venues and rake in some loot. Moving from collaborators like Ray Jr. to Waka Flocka on his latest release points to the sort of attention MGK’s received. After two mixtapes, though, the angle MGK takes on his public persona is a bit disappointing. We should all be past the dichotomy dividing MCs who talk solely about carnal pleasures from those who work in literature and thoughtful cultural references. But opening the “Rage Pack” mixtape with a track called “STFU” is just short of a tragedy. Granted, plundering The Go-Go’s “We Got the Beat” for musical backing is almost brilliant, but MGK lamenting the trappings of fame after a pair of mediocre digital releases seems a bit shallow. Apart from that problem, if one were to remove the MCs ability to say “bitch,” the song would be roughly forty seconds long. It’d be easy to extend that critique to any number of other rappers, so maybe the problem isn’t the performer in this instance, but a public so willing to digest music from a guy who only occasionally turns in remarkable work—the closing “Thought I Was Gone, Hello” is truly an impressive effort. MGK’s flow can make beats like the one found on “Fantasy” palatable, but being a willing participant in the dissemination of second-tier tripe isn’t a commendable trait. What’s even more bizarre, despite repeated references to the Browns, the Indians and Cleveland’s East Side neighborhoods, MGK and the rapper formerly known as Kid Cudi aren’t the most recognizable Lake Erie supporters in hip-hop. Stalley’s beard and vintage Indians hat are–and thankfully so. (Dave Cantor)