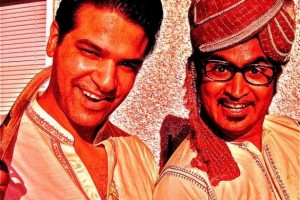 Every good theatrical performer benefits from having a partner tuned in to his or her brand of noxious foolery. BBQ has been King Khan’s foil on and off since the mid-nineties, when the pair performed as the Spaceshits, a Canadian garage and punk ensemble. The group served as training ground for the two performers who would continue recording together sporadically in ever-evolving situations over the next decade and change. For Khan, the Shrines, a German R&B group replete with horn section and a dancing girl, next served as his sounding board, holding down a groove for the singer and guitarist to flip out, dance around half-clothed and engorge his public persona with an even greater sense of abandonment. Touring with such a huge band, though, presents financial troubles—and customs officials most likely had heart palpitations while watching the Shrines shuffle through their line. So, after a few years, Khan went and found another performer to complement his odd sensibilities. Enter Bloodshot Bill, another Canadian engaged with fleecing roots music’s corpse. Never skirting his familial background, Khan played up his Indian heritage by dubbing this new ensemble Tandoori Nights and employing a faux accent on tracks like the spindly “Roam the Land” from last year’s “Curry Up.” Of course, with Bill ramping up his best gravelly Sun Record’s take on vernacular English, Khan’s schtick doesn’t seem as outlandish. The disc as a whole isn’t a surprising take on vintage garage, but Neil Young and most of the band are Canadian. So, apparently those north of the border have a pretty good handle on rock ‘n’ roll’s legacy. Outer Minds and Radar Eyes open. (Dave Cantor)