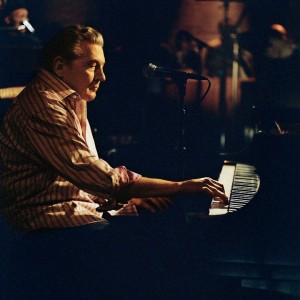 That Jerry Lee Lewis’ 1957 debut long-playing album includes a song Elvis did and a version of Leadbelly’s “Goodnight Irene” as well as Hank Williams’ “Jambalaya (On the Bayou)” says a lot about the pianist. And American music in a broad sense. Hailing from a Louisiana town west of Natchez, Mississippi and not too far from Vicksburg, the country’s historical problem with consistency pertaining to race and proper justice in general must have been pretty evident in the forties during Lewis’ formative years as a kid. But picking up on all manner of song-craft, he was able to draw as much from Cajuns as he was from dance music and R&B. There’s even a bit of stride piano style creeping into Lewis’ more rollicking numbers. Of course, the pianist’s lubricated life got him in trouble fairly often, but not enough to derail his career for more than a few years. And while that career has mostly rested on interpretations of well-known compositions, Lewis’ version of “Money” outstrips the Beatles without too much effort. In a lot of ways, the Sun Records crew wound up giving the hippie generation its loaded free-love notions. The Southerners just wouldn’t have ever referred to it as such, but that’s just another weird contradiction: the high sheen veneer of a proper, straight life while downing booze, pills and philandering. All of that being just about fifty years back has left a great deal of time for Lewis to step out of the spotlight, tend to whatever personal demons have allowed him to remain a wild performer over his career and return to recording. His latest foray into a reconstituted career, 2010’s “Mean Old Man,” finds the pianist in the company of country stars, Brit Invasion types and alongside Lewis’ proper foil, Solomon Burke, who would die just about a month after the album’s release. Their collaboration on a song called “Railroad to Heaven” seems like a decent encapsulation of American music dating back to juke joints and ducktails as well as a moment of eerie foreshadowing. (Dave Cantor)