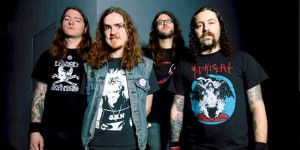 If you ever wanted to revisit the first three Iron Maiden albums—just heavier and without all that lamentable wailing that passes for singing—Saviours are probably going to fill that void in your life. What makes the Bay Area group as engaging as their British predecessors, albeit dramatically less important historically, are their brief flirtations with some of the more avant leanings of their metal brethren. There aren’t any twenty-minute excursions through drone listeners would expect on an offering from Om, but Saviours hint at such predilections. Leading off its latest album, the Kemado released 2011 “Death’s Procession,” Saviours kick into the seven-minute “The Eye Obscene.” Surely, some sort of sinister message is being relayed to listeners and during the six minutes worth of riffing, there’s not much to criticize. But the song’s final minute or so dissolves into a contoured guitar drone with a few punctuating drum fills and stray bass notes. Yoko Ono it’s not, but it serves to widen the band’s clear affinity for eighties metal and also includes dashes of Stateside experimentalism. The remainder of the album isn’t brimming with surprises, but metal’s not about mining the outer reaches of composition. What “Death’s Procession” serves to point out, though, is the fact that Saviours are capable of slowing down their music while retaining a substantial bit of the menacing qualities found on quicker efforts–“Living in the Void” from the band’s 2009 “Accelerated Living”  is perhaps evidence of this development as the song includes some basic, requisite riffing and a touch of instrumental abandon. This isn’t Pink Floyd as metal troupe, but that probably doesn’t exist. If nothing else, get a load of that Midnight T-shirt. (Dave Cantor)