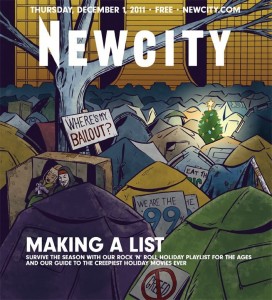 It’s hard to pinpoint the exact moment that a good idea becomes a trend, the trend becomes a cliché and the cliché thereafter morphs into an irresistible marketing opportunity. The rock ’n’ roll holiday record is as old as the October 1957 release of “Elvis’ Christmas Album,” which yielded several fine tunes, including the King’s unforgettable, bluesy rendering of “Blue Christmas.” But somewhere between the well-intentioned, if wildly uneven “A Very Special Christmas”—a multi-platinum 1987 benefit album—and this year’s perfectly even and perfectly predictable “A Very She and Him Christmas,” featuring M. Ward and Zooey Deschanel, the rock ’n’ roll Christmas record became less concept album, more hackneyed concept—often nothing but a crass attempt to cash in on the spending frenzy that is the holiday season. So, in the distinctly 2011 spirit of making do with what we already have, here’s a modest proposal for stadium rockers, indie phenoms and music industry bigwigs of every sound and stripe. Let’s lay off holiday albums for a few years. And don’t worry about us during your hiatus; we’ll be taking musical stock and listening to the too-often-unheard gems that already exist. Henceforth, our favorite rock ’n’ roll holiday songs: 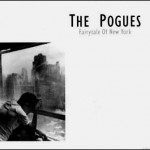 “Fairytale of New York” by The Pogues with Kirsty MacColl
From the moment Shane MacGowan starts pining in that gnarled, slurring, bleeding throat voice of his, “It was Christmas Eve, babe, in the drunk tank,” you can be sure we’re not in Bethlehem anymore. This Irish folk-style ballad, replete with accordion, banjo, mandolin and string arrangements, is an immigrant’s tale gone bad. The immigrant laments his broken American dream, and soon his beloved (enter Kirsty) places her resentments alongside his, the two of them descending into a call-and-response spree of insults that includes her witty holiday prayer: “Happy Christmas, your arse / I pray God it’s our last.” It might seem things could only get worse when she accuses him of taking her dreams from her, but he confesses that he’s kept them with him and he can’t make it on his own because he built his dreams around her. Here comes redemption the hard way, from a land of broken dreams premised on the capacity still to dream. No sentimental turnaround à la “It’s a Wonderful Life”—all we get here is the bittersweet knowledge that love often begets disappointment, and sometimes survives every disappointment. 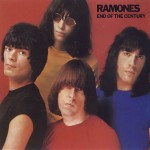 “Danny Says” by Ramones
Can one line a Christmas song make? The answer is yes, if it’s this simple chronicle of road-weariness offered by America’s quintessential punk band collaborating with Phil Spector on a bare-bones, fifties-style tune brightened by jingling percussion and the plush crescendo of plagiarized Motown harmonies and Spector’s patented “wall of sound.” Introduce Joey Ramone’s low, slowed, faltering voice into the mix and you’ll be forever haunted by memories of the ghosts of White Christmas’ past, feeling the bright pain of sunny holidays away from home spent watching TV in hotel rooms and playing gigs in LA, because as Joey says, and Joey knows, “It ain’t Christmas if there ain’t no snow.” 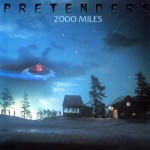 “2000 Miles” by Pretenders
Recorded not long after two original members of the Pretenders died of drug overdoses, Chrissie Hynde’s exploration of time, distance and the endless wait of longing works on multiple levels: Is she imagining the return of a faraway lover? An eternally lost friend? The child’s dream of Christmas? The rich guitar riffs and xylophone notes dropping like snowflakes between chords create a dreamy, haunted feeling, but mostly there’s Hynde’s voice—wounded, wanton in grief, absolutely her own. “In these frozen and silent nights,” she sings, “sometimes in a dream you appear.” Maybe our most secret longing—as though we’re still children in beds awaiting the promise of morning—can show its face only in sleep. 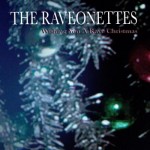 “Come on Santa” by The Raveonettes
Oh what fun it is to listen to the posh fuzz of shoegaze rock lightened by sleigh bells, snare drums, jangly guitars, and layered two-part harmonies. What happens when you mix Jesus and Mary Chain with Ronnie Spector? Well, you get this wistful 2008 ditty imploring Santa to play cupid. In this sexually charged secular prayer, a lover standing by the lighted tree receives the “greatest gift of all” (it’s not Santa, folks). 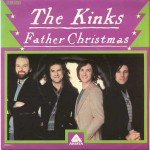 “Father Christmas” by The Kinks
So you’ve always suspected St. Nick of being a fat cat rather than a kindly old gent. Well, Ray Davies and his mates couldn’t agree more. Don’t be fooled by the upbeat, sleigh-bell-styled tambourine and xylophone at the start. Once the searing guitars and raunchy vocals kick in, this song tears a hole in holiday cheer the size of conscience itself. A gang of kids with little patience for fantasy mug Santa, then demand his money while dismissing toys as suited only for “little rich boys.” One kid prays (Ray singing sotto voce) for a job for his father and puts our privileged souls on alert. By song’s end we’re dared to go ahead with our good time, if we can still do so, while remembering “kids who got nothing” as we’re drinking down our wine. The Kinks won’t be overthrowing the crass, commercialist waste of Christmas all by themselves, but we can’t help thinking this late seventies classic might have planted the idea in Bob Geldof’s head (“Do They Know It’s Christmas?”) to make the holidays an occasion to feed the hungry rather than the sweetly satiated. 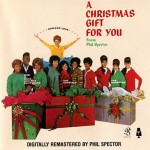 “Christmas (Baby, Please Come Home)” by Darlene Love
If there were such a thing as rock ’n’ roll justice, Darlene Love’s classic wouldn’t have been released the day of the Kennedy assassination, to be lost, at least for a while, in the dustbin of musical history. Co-written by Phil Spector, originally for Ronnie Spector of the Ronettes, who failed to infuse the song with the necessary balance of hope and heartbreak, “Christmas” became so completely Darlene Love’s own that even the 1987 U2 cover that brought it to the attention of a new generation feels bombastic and banal by contrast. Love was invited to sing backup vocals for the U2 recording, but, look, sometimes, the original really is best: forgo all covers, download this record and go back to the gorgeous source. 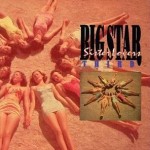 “Jesus Christ” by Big Star
Once dubbed “the unluckiest band in America,” Big Star’s unique brand of power pop—British-invasion style melodies that only partly obscure dark, even nihilistic themes—was decidedly before its time. By 1978, the critically revered band was deemed commercially irrelevant and the death of founding member Chris Bell sealed their fate, leaving singer Alex Chilton disillusioned about a music-listening public not yet ready for the Big Star sound. All of which makes the band’s early recording of a two-verse celebration of the virgin birth only more of a puzzle. Perennially jaded fans have long argued that Big Star was being ironic when the band recorded this musically and lyrically minimalistic track. But there’s purity in the simplicity with which Chilton sings, “Lo they did rejoice/ Fine and pure of voice/ And the wrong shall fail/ And the right prevail.” The accidental autobiographical resonances might break your heart, but the song sounds amazing while it’s doing so. 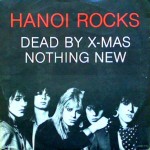 “Dead by X-Mas” by Hanoi Rocks
Just in case you were inclined to forget how downright depressing the holidays can be, this Glam Punk classic from 1981 tells the story of a recently discarded young lover wallowing in visions of a world emptied of himself. In the tradition of the finest self-punishing, just-been-dumped blues, Michael Monroe’s slashing vocals debunk Christmas glitter and the racing beat drives the story to its suicidal end, which fans of the band later interpreted as prophesying drummer Razzle’s early December death in a car crash three years later—all that history adding an eerie layer to the angelic, choirboy fade-out, “Dead by X-mas, dead and gone, X-mas is forever.” 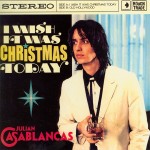 “I Wish It Was Christmas Today” by Julian Casablancas
Have you heard the one about the SNL Christmas ditty, composed and performed by Jimmy Fallon and Horatio Sanz, that was more joke than song until the frontman from The Strokes got hold of it? That’s the backstory here. But don’t pay too much attention to the childishly banal lyrics. That signature Strokes guitar and Casablancas’ inimitable voice—firm, fast, just this side of out of control—makes for three minutes of pure rock ’n’ roll holiday pleasure. 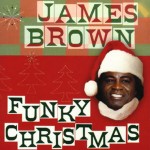 “Please Come Home for Christmas” by James Brown
Written and originally recorded by underrated blues singer Charles Brown (no relation to James), this song became a Billboard Hit in 1962 and has been covered by the likes of Willie Nelson, Aaron Neville and, most forgettably, Jon Bon Jovi. But once James Brown lays hold of this solid bluesy number, with that blistering, raspy voice of his, impostors need not apply. Here longing for an absent lover becomes a plea for something more: a release from the sort of existential loneliness the holidays so often exacerbate. As Brown plaintively wails, “No more sorrow, baby; no more greed; no more pain,” you’re left with a chill with more bite in it than a Chicago winter but also a sense of solidarity drawn from the knowledge that we all seek the same answer to loneliness.

“I Wish It Could Be Christmas Everyday,” Wizzard
Because the holiday season is camp, after all; and the video for this Glam classic is so over-the-top that pagan festivals pale beside it.

“Santa Claus Wants Some Lovin’,” Albert King
Because the three kings we most remember at the holidays are B.B., Freddie and our personal favorite, Albert.

“Do They Know It’s Christmas?” Band Aid
Because putting a stop to famine is in the Christmas spirit, right?

“Ring Them Bells,” Bob Dylan
Because only Bob’s mixed-up, syncretistic religiosity could produce such a strangely clairvoyant hymn.

“Xmas in February,” Lou Reed
Because, with apologies to John Lennon, this ode to the tribulations of a Vietnam veteran is the best Christmas anti-war song ever.

“Hallelujah,” Leonard Cohen
Because Leonard reminds us that “Hallelujah” belonged to the Jews long before Christians took hold of it.

“Merry Christmas Will Do,” Material Issue
Because no one does Chicago power pop better.  Jim, we want you back.

“All I Want for Christmas,” The Yeah Yeah Yeahs
Because when a band known for dance punk slows it down to waltz speed, we want to do the three-step.

“So Much Wine,” The Handsome Family
Because why shouldn’t this gritty bluegrass ode to alcoholism take a seat at the holiday table. Wait, she’s still sleeping off last night’s bender. Oh well.

“Donna and Blitzen,” Badly Drawn Boy
Because when Damon Gough throws down his romantic call to arms, you can almost see his past failures being left in the snow dust.

“December Will Be Magic Again,” Kate Bush
Because before there was Tori or Florence, Kate’s airy vocals were all the magic we needed.

Excellent list! Fairy Tale of NY is one of the best songs every, holiday or otherwise