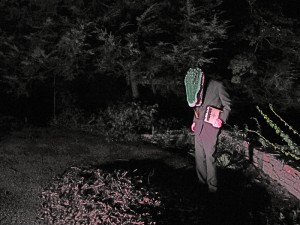 About the same time the world messed itself while listening to Panda Bear’s “Person Pitch” in 2007, Animal Collective’s other half went and issued an album with his now ex-wife, múm’s Kría Brekkan. Avey Tare’s “Pullhair Rubeye” didn’t attract the same sort of misguided attention as “Person Pitch,” and certainly not the kind of frenzy “Merriweather Post Pavillion” garnered a few years later when the world caught up with what Animal Collective had been doing for just about a decade. But the initial musical statement AT summoned outside the auspices of Animal Collective displayed a much wider stylistic range than what had been portrayed on his compatriot’s work or any of their collaborations. Strains of “Sung Tongs’” lazy folksterisms are present throughout Tare’s effort, “Foetus No-Man” with the repetitious “Palenka” especially tied to the fireside jams AT’s group worked with during the early aughties. Subsequent to “Pullhair Rubeye,” Animal Collective turned in “Strawberry Jam” and the aforementioned “Merriweather,” taking the band out of cultish shadows and into independent music’s limelight with a newfound electric focus. Tare’s next full length, the 2010 “Down There” hedged closer to what listeners would find on a proper Animal Collective album–gone were the strummed guitars only accompanied by a pair of voices. Replacing those semi-bucolic sounds were bouncing toy instruments on “3 Umbrellas” which bolstered AT’s layered singing. What this composer’s various musical stances prove, though, is that after more than a dozen releases he still has some more ground to cover. Maybe the frenzy surrounding AC’s last album was deserved. Maybe it wasn’t. But what isn’t debatable is the fact that AT and whoever he chooses to pair with have the ability to ramp up a handful of tunes to a point beyond that of most contemporary performers. Eric Copeland’s along for this tour. While his time in Black Dice still defines his career, Copeland’s been amassing a catalog as deep as AC’s and just as bizarre. (Dave Cantor)