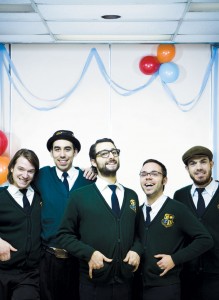 The fact that this Montreal-based band writes most of their material in French should not be a reason for alt-rock fans not to check them out. These guys have been packing venues with 3000-plus capacity back home while performing at much smaller rooms in the United States, but it’s just a matter of time before they are discovered by more mainstream audiences Stateside, in the same manner that folks like Manu Chao and Sigur Rós have before them.

Their sound is pretty aggressive. Guitarist and vocalist Louis-Jean Cormier sings and plays with great passion, and his band mates (keyboardist François Lafontaine, bass guitarist Martin Lamontagne, percussionist Julien Sagot, and drummer Stéphane Bergeron) keep up with gusto in tunes like the psychedelic-inspired  “Le  Pyromane” (from their recently released “Les Chemins De Verre”) or the grunge-y “Le Coup D’ Etat.” A reviewer once compared Karkwa to Radiohead, but they really go far beyond that, and use their great creativity–and fantastic chemistry–to create a sound that is all their own. (Ernest Barteldes)