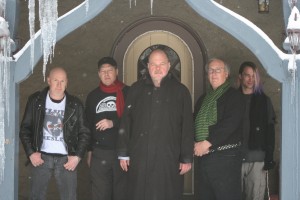 We all have access to Google, so let’s dispense with the historical round-up that accompanies anything written about Cleveland’s Rocket from the Tombs. Singer/moaner David Thomas collects Richard Lloyd and Pere Ubu drummer Steve Mehlman to fill out this reconstituted Rocket lineup, which somehow still includes Cheetah Chrome and Mirrors’ Craig Bell. Turning in this year’s “Barfly” counts as the band’s first proper full-length even after Chicago’s Smog Veil Records dug up demos and would-be album tracks dating to 1974 for the insurmountable “The Day the Earth Met …” With three decades separating recording endeavors, it’s not a tremendous surprise that “Barfly” bears only the slightest similarity to all those early punk classics. What’s represented here are a buncha dudes whose legacy has already been cemented, but who endlessly search for new avenues to express old ideas. “Six and Two” sounds more similar to Bell’s work with Mirrors than anything Rocket could be expected to deal with. It’s a mid-paced rock track that doesn’t get too haughty, but sports some of Lloyd’s fluid guitar work. Here, Thomas doesn’t sound like too much time’s passed since recording that handful of music in some drafty loft during the seventies. But it’s a momentary triumph. Opening the disc, the band goes in on “I Sell Soul,” which remarkably lacks what the band proclaims to be dealing and somehow finds Thomas sounding like Greg Proops fronting a rock group. Comedy does not ensue. In tandem with that track, “Romeo and Juliet” was released as a single earlier this year with lines like “This is me sitting on a couch,” arriving as a lyrical extension of Thomas’ refrain in Pere Ubu’s “Caligari’s Mirror” when he apparently just walks around and hops public transit. It’s these drab lines of uncaring that link the newly minted Rocket to Cleveland’s rock lineage, not the music. The latter’s not a bummer, just not too adventurous. Plastic Crimewave Sound opens. (Dave Cantor)