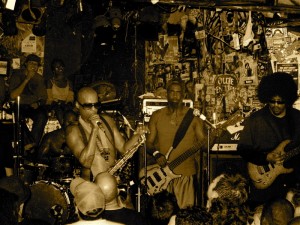 Without Fishbone, Sublime and No Doubt would have wound up being drug-addled SoCal footnotes. Whatever eventually became the American conception of ska music didn’t begin with Angelo Moore and Norwood, but their group’s all-inclusive approach to songwriting influenced a generation of weird bands. It’d actually be reasonably easy to round up Fishbone’s Jamaican-related efforts onto a single disc–the six-minute “Party at Ground Zero” being an epic accomplishment made even more stunning by the fact that the song was issued as a part of the band’s first EP back in 1985. Along with that tune were a spate of assembled compositions pointing toward the expanding view on music Fishbone would represent on long-players like 1988’s “Truth and Soul.” By that disc, though, Fishbone’s appreciation of pop-metal and soul music was as evident as the Jamaican stuff, “Ma and Pa” remaining a quintessentially American ska track with its breakneck tempo and critical view of the nuclear family. Opening “Truth and Soul” with a Curtis Mayfield cover detailing the perils of slanging drugs and the culture around it, though, sits the band alongside Chuck D. and other vociferous politicos of the era. Combining all these elements obviously came to bear on groups like the Chili Peppers even as Angelo and company retained only a cult appreciation, somehow unable to capitalize on the mid-nineties’ ska boom. Issuing the “Crazy Glue” EP this year renews the band’s musical vision as does the documentary film “Everyday Sunshine: The Story of Fishbone,” which Lev Anderson and Chris Metzler will be showing to coincide with the band’s local date. Angelo and Norwood are set to be on hand answering questions after a screening December 10th, while both filmmakers will stick around after on the 9th, 10th and 11th. Even if no one’s present to field questions, catching the film should grant fans a version of Fishbone’s history more personal than musical, but certainly a unique one. (Dave Cantor)