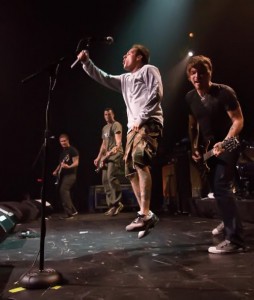 Hardcore’s a pretty personal music. Detailing tough times and political views, though, isn’t the totality of the form lyrically. So, it’s unsurprising that H2O would release an album comprised of compositions from a handful of decade-old groups that band members idolized in adolescence. H2O, which started kicking around during the mid-nineties, lays out a Bad Brains track to open “Don’t Forget Your Roots.” While eventually working in NYC bands like Madball, they are also conscious of including left coast acts like Social Distortion. It’s an unsurprising collection of songs even if the Mighty Mighty Bosstones crop up to remind listeners Dicky Barrett’s lineage reaches back further than third-wave ska. Titling the disc of covers “Don’t Forget Your Roots” seems like a trite way to go, but being familiar with H2O mitigates some of the cringe-worthiness of the disc’s name. Issuing its eponymous album in 1996, the band included a track called “Family Tree,” during which H2O elucidates running around the city and getting in trouble. The one available refuge was the scene, its crews and a cohort of bands that counted Sick of It All in its ranks. The song begins with a hardy refrain of “Don’t forget your roots,” rivaling chanted choruses from any vintage ensemble, including anything from H2O’s new disc. Of course, trotting out an album meant for reminiscing after releasing only two other long-players over the last decade doesn’t point to an artistic peak. Hardcore groups aren’t known for grace and subtlety, though. That explains the cribbed opening to H20’s “Talk Too Much” from the band’s second disc. Despite a lack of sustained musical maturation, reworking tracks from 7 Seconds and the Clash force this group to smooth out some of its lesser musical proclivities. It’s still hard for Adam Blake to hold down Matt Freeman’s bass-line on the cover of Rancid’s “Journey To The End Of the East Bay.” (Dave Cantor)