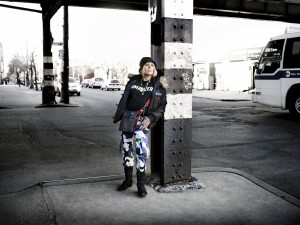 The first thing to know about lead musician Genesis Breyer P-Orridge is that s/he (the preferred non-gender identification) is a combination of two people who address themselves as “we.” Breyer P-Orridge had a longstanding, fruitful and intimate relationship with a woman named Lady Jaye. In search of a way to consummate their love for each other and unsatisfied with simply saying “till death do us part,” they wanted to actually consume one another. And, in essence, they did. They went to plastic surgeons and exchanged each other’s skin, made each other’s cheekbones look alike, got breast implants for the same size cup, and so forth. Since Lady Jaye passed on from stomach cancer in 2007, Breyer P-Orridge considers h/erself an embodiment of both people, and to some extent, a connection to Lady Jaye’s place on the other side. Breyer P-Orridge and Lady Jaye called their project “Pandrogyne,” and part of the intent was to transcend the trappings of the body and to nullify the concept of gender. Some people consider themselves to be a man stuck inside of a woman’s body, or a woman stuck inside of a man’s body, but to Genesis, s/he is simply “stuck in a body.” It’s not transgender as much as it is post-gender.

Pandrogyne is an extension of the cut-up theory that Genesis Breyer P-Orridge upheld near the end of the sixties, along with William Burroughs and Brion Gysin: The concept of cutting up words from newspapers or notebooks and reassembling them to create chance combinations of words. Even in high school, P-Orridge tells me, s/he and a group of friends put together a group called “Knights of the Pentecostal Flame,” where they would leave stacks of cards with random words or phrases on them at pubs, in ashtrays and other public places. “Beautiful Litter,” as they called it, would leave it up to whoever found the cards to decide the extent of how they read the “poetry.” The group received media attention from churches, the press and even BBC Radio. The project was rooted in Dadaism, but people surmised that “Knights of the Pentecostal Flame” were a spiritual group (or perhaps a cult) and the Knights were invited to speak publicly on a few occasions.

P-Orridge dropped out of college and joined an artistic yet disciplinarian community called Exploding Galaxy that relinquished all concepts of privacy or social convention, engaged in role-playing and rejected class hierarchy. Throughout the seventies, after having made h/er first recordings, Genesis developed a “prankster collective” called COUM, whose collages juxtaposing Queen Elizabeth with porn led to a court case in 1975. Art exhibitions with used tampons under glass and depictions of prostitution brought on more heat from authorities and negative reviews in the papers. Unsurprisingly, those reviews were then cut up, framed and exhibited, resulting in more negative press and even more cut-ups.

COUM evolved into Throbbing Gristle, a group that pioneered the concept of industrial music using loud, abrasive sounds along with drum-machine propulsion, Nazi or serial-killer imagery and lyrics about burn victims. Throbbing Gristle formed Industrial Records and released recordings by Monte Cazazza, a man who used to walk around with a dead cat in his suitcase and SPK, a band inspired by mental patients turned terrorists, as well as other prototypical and “difficult” forms of early industrial, like Clock DVA, Cabaret Voltaire and The Leather Nun.

Psychic TV was created out of the ashes of Throbbing Gristle’s disbandment in 1981, and they went on to expand upon cut-up theory in music, implementing magically driven automatic writing, a form of free association, in performances or recordings. They contributed to a huge trend in mysticism and the occult, foresaw acid house and rave culture, and even broke a Guinness World Record for releasing so many records.

Psychic TV continues to try to redefine language, using “ov” instead of “of” and making up words like “ex-form” and has evolved into a chameleonic entity with its hands in many pots. It has extended into an online community, One True Topi Tribe, with the intent to facilitate actual self-sustaining communities in the future. Breyer P-Orridge has done spoken-word performances under the name Thee Majesty, and has had many of h/er writings published, mainly on the subject of mysticism. S/he has also written a book of collected poems and thoughts “Ooh, You Are Awful… But I Like You!” and “Thee Psychick Bible.” Credited on over 200 releases, P-Orridge has collaborated with Skinny Puppy, Download, Merzbow, Z’ev and Pigface, among many others.

To this day, Genesis Breyer P-Orridge pontificates about cut-up method, the simple concept of taking things apart and putting them back together differently, as a full-fledged philosophical milestone. “They bring in the unexpected”  s/he says. “It’s really hard for people to truly change their behavior patterns, their inherited ones, the socially imposed ones, the legally imposed ones, those are really really hard to break, things that you’ve grown up all your life just doing, those buttons that people can press that make you react in a particular way…You can create situations where unexpected results happen, and you can perceive the world differently as a result.”

A couple of years ago, Genesis Breyer P-Orridge retired from touring, but s/he’s come out of retirement, and Psychic TV is back with a new roster. “This new lineup of Psychic TV…is in my opinion the most successful by far of all the lineups we’ve had. The music we’ve been creating is the most exciting and perfect, in my opinion, that we’ve ever made,” Breyer P-Orridge says. At one show in Moscow, the crowd was so enthusiastic that the band played for more than two-and-a-half hours. Between encores, they decided to let the group be stripped down to the guitarist and keyboardist and played “Maggot Brain” by Funkadelic to let the others have a break—even though the keyboardist had never heard the song before. In the studio, they beefed up their version of the song with a full band (unrehearsed), and new improvised lyrics, as part of recording three new singles, also including a cover of Can’s “Mother Sky,” and “Thank You” Parts 1 and 2, an exchange of praise between Lady Jaye and Genesis. “In retrospect, we got into a trance,” s/he says.