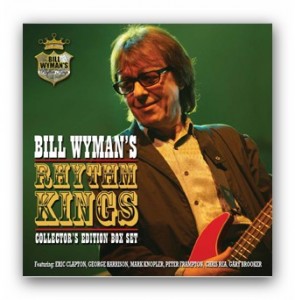 When Bill Wyman left the Rolling Stones in 1992, fans of the septuagenarian bassist thought he would simply retire and concentrate on Sticky Fingers, his United States-themed cafe (according to Keith Richards’ best-selling autobiography) and his signature metal detector. However, nothing could be further from the truth. He has kept quite busy with his Rhythm Kings, a band he founded in 1998 with longtime musical partner Terry Taylor.

Over the years, the band has featured countless musicians on stage and in studio–among them Eric Clapton, percussionist Ray Cooper, Gary Brooker, the late George Harrison, Mark Knopfler (Dire Straits)  and even former Stones alum Mick Taylor, who joined the group during their 2009 tour and continues to perform and record with them. In spite of their success abroad, the Rhythm Kings have never really achieved the fame they deserve Stateside, arguably due to the fact that they have not toured here extensively since 2001.

This might be remedied by a five-disc box set that covers their entire career dedicated to a blend of blues and rock–the kind of material that the Stones might be doing today if it weren’t for Mick Jagger’s preference for making the band sound more contemporary. Here we hear gems like “I Put a Spell on You” with soulful vocals by singer Beverley Skeete and “Tobacco Road” alongside original songs by Wyman that sound as if they had been written in the 1950s.

The entire set is a journey in music and also a grand party inspired by jazz, blues and old-time rock and roll. It is also an opportunity to hear Wyman’s diverse tastes and his own vocal range, which we never got to hear when he was still with Jagger & Co. It is also an alternative way to celebrate the Stones’ fiftieth anniversary—even if only two of the guys are there. (Ernest Barteldes)