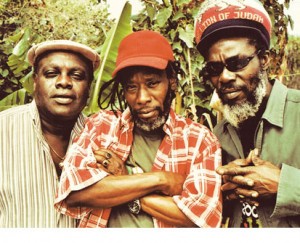 Landing a deal with Virgin Records for its first long-playing album, the 1976 “Right Time,” was obviously a boon to the Mighty Diamonds and their career. But just as fortuitous as that initial record deal was, so was landing Ernest and Joseph Hoo Kim behind the boards for the vocal trio’s sessions. Along for the endeavor was ex-Skatalite Tommy McCook and a cast of players heard on work from the Marley oeuvre as well as “The Harder They Come.” But the Diamonds were then, as now, an entity unto themselves. Avowed career highlights like “I Need a Roof” cropped up amid this handful of early tunes, as did the Garvey-centric “Them Never Love Poor Marcus.” Of course, acts like Burning Spear were already deep in such references, and pulled it off in significantly more organic form. But The Diamonds didn’t exactly suffer from being overproduced despite being one of the early roots acts exposed to international audiences. “Leaders of Black Countries,” which was reissued this year through the Kingston Sounds imprint, gingerly moves the band into the steppers arena. The dub versions tacked on to the end of the reissued album are part of what makes the effort so enticing in a time and place removed from strife. But if old-time fans are weary of The Diamonds’ collective vocal chords being spent after four decades of work, 2008’s “Inna De Yard” should have mitigated those fears. As a part of the Makasound label’s acoustic series, the Diamonds, accompanied by nothing other than a guitar and nyabinghi percussion, set out to reinterpret classics from JA music history. “4000 Years” was a powerful recording in 1979. Re-recorded almost thirty years later, the composition and the voices singing it retain all the original’s grace and beauty. Chicago locals Indika open. (Dave Cantor)