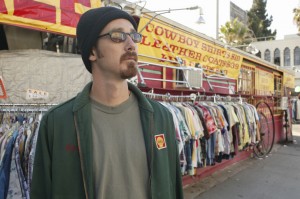 During Moon Ska Records’ final few years, Chris Murray remained one of the few acts issuing music through the New York-based imprint who retained a unique musical identity. Amid the ska-cum-rock-oriented fare, Murray’s work was anachronistic—predating all the lo-fi nonsense the music press caught onto a few years back. But by the early aughties, the L.A.-based singer and songwriter had so well defined his sound that not having a label signed up to issue his work on a regular basis wasn’t really a problem. The difference in fidelity between 1996’s “The 4-Track Adventures of Venice Shoreline Chris” and 2008’s “Why So Rude?” is apparent, but not significant. While mining Jamaica’s rock steady period, though, Murray occasionally ends up appropriating other musics—his “Back Rooms and Diesel Fumes” really winds up sounding like a Jimmy Reed blues shuffle, not an island dance tune. A handful of compositions, though, do reveal how significant a talent Murray is. “Let There Be Peace” might be a trite song title, but the music apes such a thrifty, tinny JA sound, it’s hard not to listen to the tune and hit repeat. The same goes for near-masterpieces like “One Everything” and “Heartache.” His appearance during the second night of the Beat Kitchen’s pair of ska nights slated to end the year is easily the more attractive with DJ Chuck Wren spinning records and locals Deals Gone Bad headlining for the evening. The Scene: There’s bound to be a weird discrepancy between age groups represented here. Certainly, some folks are going to be just this side of the legal drinking age. But the likelihood of a buncha folks between twenty-four and thirty showing up isn’t too great. Above thirty, sure. One of those guys is going to be wearing a bowling shirt and a pair of horn-rimmed glasses; forgive him. He remembers when the Toasters released “Dub 56.”