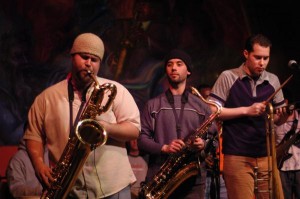 The hallmark of a good band is its ability to perform in any setting at any time. Gigging at a local Occupy, the Chicago Afrobeat Project played to a sympathetic crowd, one almost expected to take in the confluence of funk, jazz and afro-stylings as the norm. If no one said anything about a post-racial America, they were thinking about it. Several months earlier, though, CAbP did a spot at the Beachland Park, a private beach club in Cleveland. Private might be too strong a word. There’s no gate, but there are fees for residents who use the park on a regular basis. It even has a clubhouse for gatherings. If one were to wander onto the narrow slice of land, which quickly drops away to some craggy shoreline, it wouldn’t be a tremendous shock to be queried by some off-duty doctor about what street the visitor called home. Good place to read a book, though. The Abbey Pub doesn’t bear much resemblance to either of those other two settings, but CAbP won’t have a difficult time being ingratiated to its audience. The band hasn’t been recording vigorously over the last three years, a 2008 EP being the last disc to hit the market. But the ensemble’s pair of full-lengths, mostly comprising extended instrumental numbers even as a couple vocals crop up, should provide more than an ample backlog to run through for the evening’s set. Animate Objects open. The Scene: Vibes that far north are bound to be reasonably relaxed, making for a dancefloor shorn of pretense. Of course, any venue with the word pub in its name begs for a few loud-mouthed drunkards. The Abbey’s VIP treatment, counting special seating, open bar and the always important appetizers offers a reasonable alternative to rubbing elbows with the 99 percent. Just remember to store away some of those appetizers for the next day’s impending hangover. (Dave Cantor)