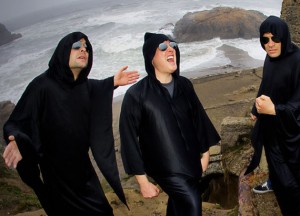 The Spits’ decade-old career based on the angriest pop melodies possible is a remarkable thing. Throwing out three-chords in endless succession with only the slightest variation sounds, in theory, like a very troubling thing. But with the Wood brothers snarling hate-fuck lyrics, each song takes on a visceral nastiness absent from just about every other punk band kicking around on the planet. Issuing its fifth self-titled long-player this year, also referred to as “V,” the band seems to retain its ability to gussy up simplicity and truck it out simply for the fun of dispensing downer rock tracks—“My Life Sucks” is followed quickly by a track called “I’m Scum.” Maybe the Spits are a weird extension of Baudelaire, although allusion and analogy have been replaced by straight-ahead nihilism here. But even the band’s outtakes, as represented on “Kill the Kool,” pretty easily outstrip whatever punk band’s schlock is on year-end lists. Passing on the Northwesterners’ simplicity is Indiana’s TV Ghost, an ample extension of Indiana’s weirdo take on the genre. Renowned for its live show, TVG recently released its second full length, “Mass Dream” via In the Red Records, sporting frantic tunes like “Doppelganger,” with its roots reaching to East Bay Ray’s guitar theatrics while simultaneously summoning Peter Murphy hollering paranoid couplets atop a cabaret table. The Scene: Seeing the Spits on NYE is the only show where one’s likely to get punched in the eye and feel alright about it. With the spectre of impromptu explosives being detonated at its performances, the Seattle-based band totes around a pretty specific fan base. Having locals Mickey open is only going to exacerbate the wastoid factor. But that’s what makes the bill so enticing—it’s an extension of Blackout Fest. And blackouts will be on tap at the bar. (Dave Cantor)