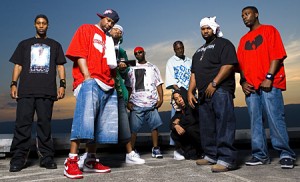 With the release of “The W” in 2000, Ol’ Dirty Bastard contributed his final verse to a Wu-Tang Clan cut. The MC, who died four years later, went out on a track he shared with Snoop Dogg called “The Conditioner.”  The fact that “The Conditioner” counts a West Coast stalwart speaks to the Clan’s ability to transcend any perceived constraints of coastal prejudices. In 2007, the group issued “8 Diagrams,” a universally panned long-player that sported a few interesting guest spots as well as a posthumous appearance from the mythical Clan member. Including ODB on a release a few years after his demise exemplifies how the spectre of ODB’s personality continues to loom over the group. If there wasn’t ever another new Wu-Tang track, the world would be able to subsist off its back catalog and the various solo endeavors crew members have undertaken. Wu-Tang remains a sizable draw, regardless of how far the troupe is from its earliest releases and its performances still warrant a keen eye and, perhaps most importantly, more than one of the performers rank as genre innovators. Storytelling has always been a part of hip-hop, but there’s nothing comparable to Raekwon’s body of work. The RZA’s inimitable production style is rivaled only by Madlib—and on occasion folks from D.I.T.C. And Method Man, of course, is a force unto himself. (Dave Cantor)