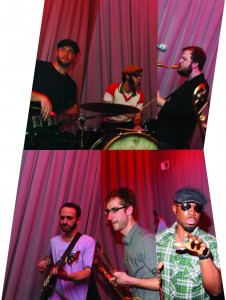 Glancing at the two-day line-up for Martyrs’ Sousaphenia Festival, it doesn’t appear that more than a band or two is actually going to include a sousaphone amid its ranks. Chicago’s The Drastics haven’t made it a practice in the past, but that hasn’t affected their ability to consistently issue instrumental tracks marked by the influence of Jamaican studio geniuses as well as American soul music. First releasing a long-player in 2005 on Jump Up Records, “Premonition,” the ensemble showed up toward the end of the label’s busiest period and sounded like little in the imprint’s catalog. Chicago’s infatuation with Jamaican music reaches back to the 1980s with acts like Heavy Manners aping a 2-Tone vibe, which was clearly a style influenced as much by then-current pop and rock as it was Caribbean styles. The Drastics, well removed from the culture that helped create the Manners as well as the English Beat, remain a highly regarded if not tremendously well-known commodity. Pulling Dr. Ring Ding and King Django in as guest vocalists for their debut album says a great deal about the musical ability these players tote around. The guitar solo on “Waiting,” from the band’s album of the same name, would sound as natural in the middle of a slow psych workout as a jazz fusion track. It’s that sort of ambiguity that makes The Drastics such an understated act of genius. With Chris Merrill and Anthony Abbinanti holding down rhythm duties on bass and drums, respectively, the remaining players are gifted with the freedom to express whatever musical mode they feel necessary. Of course, minimal grooves beg for some aural experimentation, and in a live setting that might mean any number of things.  (Dave Cantor)