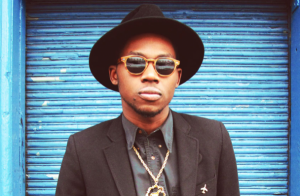 Theophilus London was kicking around before the release of his 2009 digitally disseminated “This Charming Mixtape.” But even a few years back, positioning oneself as an unabashed lover of all musics within hip-hop seemed like old hat. And it was. What makes the New York-based MC an intriguing character, though, isn’t his music—it’s his weird attention to detail. The cover of “This Charming Mixtape” is London posed behind a camera, mimicking Elvis Costello’s “This Year’s Model.” He’s got it down to the awkwardly gesturing left hand. That sort of dedication to a music that isn’t generally connected to hip-hop’s lineage is admirable, if not indicative of the work’s buoyancy. Delving into the minutiae of the English language is what good rappers do. But saying “Herbie Hancock” and emphasizing the last syllable of the pianist’s name isn’t new, overly creative or really vaguely interesting. So London’s use of the tactic during the opening track on his Reprise debut, “Timez Are Weird These Days,” doesn’t portend greatness. What appears to have saved the MC from the digital dustbin is his ability to deftly move from spastic raps to pop hooks–provided by either himself or a wealth of collaborators–and back again. “All Around the World” might be a tremendously obnoxious track to hear, but it’d be pretty easy to imagine the music being pumped into some clothing store where women totter on heels too high to be functional while sifting through flimsy, overpriced duds. “Girls Girls $” redoubles London’s effort to craft dance music equally useful for rapping over as it is for doing cocaine in the bathroom of a club. All of this will probably contribute to the MC’s longevity, but there’s scant necessity to witness it firsthand. London performs as part of the Tomorrow Never Knows Festival, which also sports similarly such forgettable and equally well connected acts as Two Gallants. (Dave Cantor)