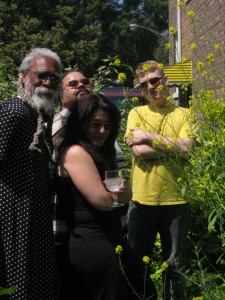 The three Chicago bands—Moonrises, Wumme and ONO—set to take the Bottle’s stage on Monday the 16th represent dramatically different takes on music. Of course, somewhere, each of these ensembles has been referred to as psychedelic. With such unique practices setting each group apart, there’s bound to be at least one band concertgoers will love and at least one they’re likely to hate. Moonrises sports Plastic Crimewave Sound’s guitarist out front in a trio sans bass. It’s not probable a cover of “Light My Fire’s” on the way, but Moonrises skirts jazzier intentions as well, churning out tunes not dissimilar to Moon Duo. And yes, the names are a coincidence. Wumme apes the most spacey take on drug music slated for the evening, summoning a litany of Germanic players with names everyone pronounces differently—they all owned synthesizers, though. Performing first and offering the longest history is ONO. The only proper corollary for the shifting collective would have been No Wave’s fallout in New York and the Los Angeles Free Music Society. Unsurprisingly, none of those associated acts have gone on to become household names, even in the homes of the most clandestine record collections. Hearing ONO’s pair of releases, dating back to the 1980s, there’s little likelihood of the dance floor being filled with shimmying shadows. But taking in “Machines That Kill People” should grant listeners a better understanding of Chicago’s skewed rock history—and explain why Touch and Go was able to flourish for such a long time. ONO never represented a generally palatable music. But the various strains of music the ensemble attempted to incorporate into its recordings and live performances represents a significant effort to reconcile variegated art practices, both musical and performative. (Dave Cantor)