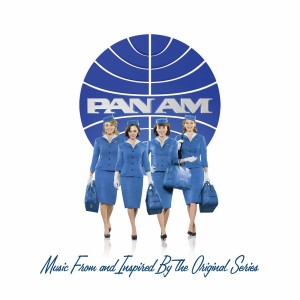 On the ABC television series “Pan Am,” we follow the lives of a crew working for the legendary airline as they crisscross the globe in what is regarded as ‘the golden age of air travel’—a time with few (if any) security issues, no luggage fees and complimentary meals on board. In the background of each episode the music from the time plays, according to each destination the group flies to.

Many of the songs on the soundtrack CD are related to flying, including Ella Fitzgerald’s “Blue Skies,” Buddy Greco’s “Around The World” and Dinah Washington’s “Destination Moon.” Getz/Gilberto’s “The Girl From Ipanema” and Sergio Mendes’ “Mas Que Nada” represent the bossa nova era (one of the early episodes takes place in Rio de Janeiro, Brazil).

In an obvious attempt to attract younger fans, producers included two new recordings: a delightfully fresh rendition of the Beatles’ “Do You Want to Know a Secret” by singer-songwriter Nikki Jean and a jazz-tinged take on “Fly Me to The Moon” by Grace Potter of the Nocturnals.

Although the music was cleverly selected, the presence of rock and folk is sorely missed. Sure, all the classics sound great, but where are actual songs that were actually the soundtrack of the era? Sure, “Ipanema” was a huge hit in 1964, but there is zero reference to Bob Dylan, The Rolling Stones or anything even close—which makes the collection feel a bit incomplete. (Ernest Barteldes)

Various Artists
Pan Am: Music From And Inspired by the Original Series
(Verve)