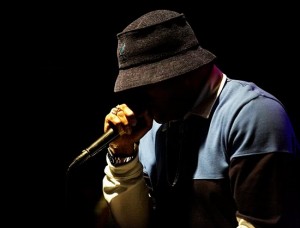 Walking into a drugstore during the middle of the day doesn’t generally present the opportunity to chat up dead-eyed clerks. I, however, had the pleasure of accompanying a friend who was wearing a Kool Keith T-shirt on an important errand to snag a bag of chips. While being rung up, the clerk quizzically glanced at my friend’s T-shirt and asked, “Who’s that?” “Him? That’s Black Elvis,” my friend replied. “He stupid” was the retort. Black Elvis, one of Kool Keith’s innumerable aliases, is stupid. The character isn’t anything more than Keith, the most notable former Ultramagnetic MC, in a weird, plastic Elvis hairdo. Hailing from an album named after the character, the persona lacks the definition that Dr. Octagon and several of Keith’s other schizo-fantasies possess. He is stupid, though. On the same disc giving birth to Black Elvis, Keith took the time to discuss extraterrestrial life and robots—a pair of favored topics. “I’m Seein’ Robots” hints at the bizarre kaleidoscope imagery that constantly seems to be running through the MC’s mind. During the song’s chorus, Keith simply explains that he sees robots. Each verse, though, deals with a woman’s living situation. Coupling the two doesn’t make much sense, but the chorus bears repeating regardless. Tashan Dorrsett, Keith’s latest concoction, has served as the rapper’s public face over his last two albums. The veteran’s flow hasn’t become any more sensible, and retains a shockingly varied vocabulary likely to surprise any listener unfamiliar with the MC’s past. While Tashan, Black Elvis and Dr. Octagonecologyst all clearly love women, each takes dark detours, some a bit too graphic for general consumption. Getting to witness this performer’s ability firsthand is unquestionably worth the time and affixed price tag, though it’s not too much of a stretch to guess some in attendance might feel a bit uncomfortable at times. (Dave Cantor)