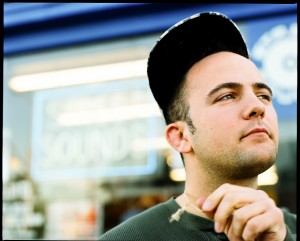 Well, Matisyahu renounced dogmatic adherence to Jewish law that was written a few thousand years ago. He wasn’t exactly a rapper, favoring sparse Jamaican backing to traditional boom-bap. But when the performer, now shorn of his gnarly beard, ditched those antiquated ideals, he left Kosha Dillz as the most visible Jew-centric player in underground musics. Well, him and John Zorn. But their paths can’t cross too frequently. Born in New Jersey to folks Dillz refers to as Ima and Abba, Dillz began a serpentine path to becoming an established Los Angeles-based MC. There’s some mention of slangin’ and jail time in just about every write-up about the performer, perhaps to pad out the credibility of a Rutgers graduate issuing hip-hop records at the age of thirty. That seems like senseless backpedaling, though. What’s more intriguing about Dillz’ background is his time working open mics in New York during the late nineties when Rawkus Records’ signees stomped through the same venues. During those evenings, Dillz came into contact with C-Rayz Walz. The two released “Freestyle vs. Written” a few years back, instantly granting the lesser-known MC a fanbase predicated on the other’s established renown. While the album pulled in positive reviews, the rapper ventured out on his own for “Beverly Dillz,” a disc sporting noticeably more analog-styled productions. Of course, a good rapper can go in over any musical backing. And that’s the case with this West Coast transplant. Lyrically, there’re some pretty standard topics broached—relationships and the like. During moments when Dillz references hip-hop’s history and his own cultural background are the notable moments—matzoh balls and couscous are included in couplets on “Taste Good,” from Dillz’ solo effort. (Dave Cantor)