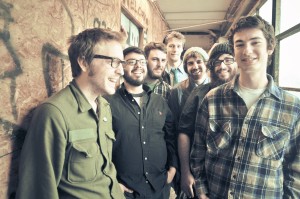 There are places with a deeper connection to Jamaican music than Cincinnati, Ohio. The city, with its downtown area spilling over into Kentucky, feels like the gateway to the South. Doormen at shows can sport significant accents and there’re bound to be more than a handful of folks who eat nothing other than fried foods. Of course, Cincy counts Bootsy Collins as one of its best exports and Mood issued some of the most engaging hip-hop of the Rawkus era, pulling in Talib Kweli and DJ Hi-Tek as accomplices. The Pinstripes, though, sit outside of that history. During the last major swell of JA-related bands in the States, Ohio didn’t contribute too much to the movement. And while The Aggrolites and similarly minded acts have taken up the mantle over the last several years, there hasn’t been a crowned figurehead of this latest clutch of performers—certainly no act comparable to Hepcat. The Pinstripes have a few releases in their past, one in tandem with Indiana’s Green Room Rockers with whom they share the stage this Saturday. On the Cincy band’s “The Decay,” there were significant indications that ska’s third wave still held sway over the proceedings. Songs like “We Come Apart” open with antics better suited to Angelo Moore’s band before settling into some mid-tempo fare. Similar efforts were the sound of a band finding its footing. On several tracks recorded by The Drastics’ Anthony Abbinanti for the forthcoming “I” album, The Pinstripes seem to have slowed down tempos and concentrated on bringing in some soul music and ditching rock-oriented moments. There’s a Slackers’ track called “Mommy,” but The Pinstripes turning in “Mother” and its acrobatic vocal lines make the composition unique in a field of acts working up paeans to weed smoking and vice. (Dave Cantor)