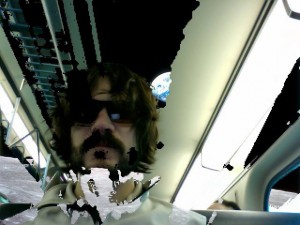 The 1990s and early 2000s, especially, were a crucial time for Victor Villarreal. After successful runs with punk pioneers Cap’n Jazz and Owls, among others, he disappeared from the scene he helped establish to focus on other, non-musical endeavors. His seven-plus-year absence ended in the summer of 2009 when the Chicago guitarist resurfaced in DeKalb, a small college town an hour and a half westward, with a handful of strings and headful of new solo material—his first ever to feature his own vocals. Villarreal played a couple of shows to support “Alive,” his debut album, before reuniting with his old bandmates a year later to tour with Cap’n Jazz. The months thereafter were quiet for him, and aside from an odd release here and there and a number of appearances supporting fellow Chicago outfit Joan of Arc on guitar, nobody really knew what Villarreal had been up to.

That all changed last month, when he announced his new record and accompanying three-week tour via Kickstarter. “Invisible Cinema,” the seven-song follow-up more than two years in the making, sets Villarreal’s familiar rhythmic, finger-picking style to words evoking a personal imagery and sense of self. The tour, which begins in Champaign January 20, features two stops in Chicago, including a 9pm show January 21 at Cafeteria de Pancho (or just Panchos) in Logan Square. Villarreal will be supported by White/Light, A Tundra and Meryll, three acts with talent well-connected to his other bands, as well as a growing following each their own. (Derek Walker)